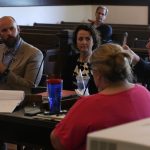 Just as local behavioral health leaders want to build up a crisis intervention center at the future Douglas County Recovery Campus, they want to break down some infrastructure that could stand in their way.

Douglas County commissioners heard Wednesday about plans beyond the blueprint for a behavioral health and substance use crisis center that will be located at West Second and Maine streets. If the behavioral health leaders who spoke at the commission’s work session are successful, their work could have an impact at the state level as well, they said.

Stephen O’Neill, chief operations officer at Bert Nash Community Mental Health Center, told the commission about a site visit to Connections Health Solutions programs in Tucson and Phoenix, Ariz. In that “mind-altering” experience, he and the others on the visit realized that they could do something that’s different, better and unique for Douglas County, he said.

O’Neill told the commission he thinks the county is positioning itself to “move the needle on what’s possible,” rather than just follow what others have done.

“So we’re going to put forth what we think is best for Douglas County and try to bend all of the powers that be to our will,” he said. “… I think there’s just an opportunity to engage the state around how to do things differently than they’ve always been done, again, to create a better experience for those folks in Douglas County; having a better integration of care by removing what are artificial distinctions between mental health, substance abuse and physical health.”

Sandra Dixon, director of behavioral health services at DCCCA, explained how policies at the state level dictate how certain things must be done, and what Douglas County leaders want to do differently with the crisis center. As an example, the project leaders want to have “truly integrated triage,” meaning that they wouldn’t separate clients based on whether the crisis they’re experiencing is more behavioral health-related or substance use-related.

“Human beings — we’re complex, and we have to design a facility that brings all of those components together and wraps them around our community members,” O’Neill said.

However, under current state regulations, what they envisioned wouldn’t be possible, Dixon said.

Commissioner Nancy Thellman asked how it would impact the plans for the building if the state did not get on board with this idea. Derrick Hurst, director of the Integrated Crisis Team at LMH Health, said there might be some slight differences, such as needing separate entrances and two different intake spaces, but it wouldn’t require any major additions.

“It will be easier and more efficient and less costly, I believe, when we can get state leadership and their staff to come to the table and listen to the vision and how regulation gets in the way,” Dixon said. 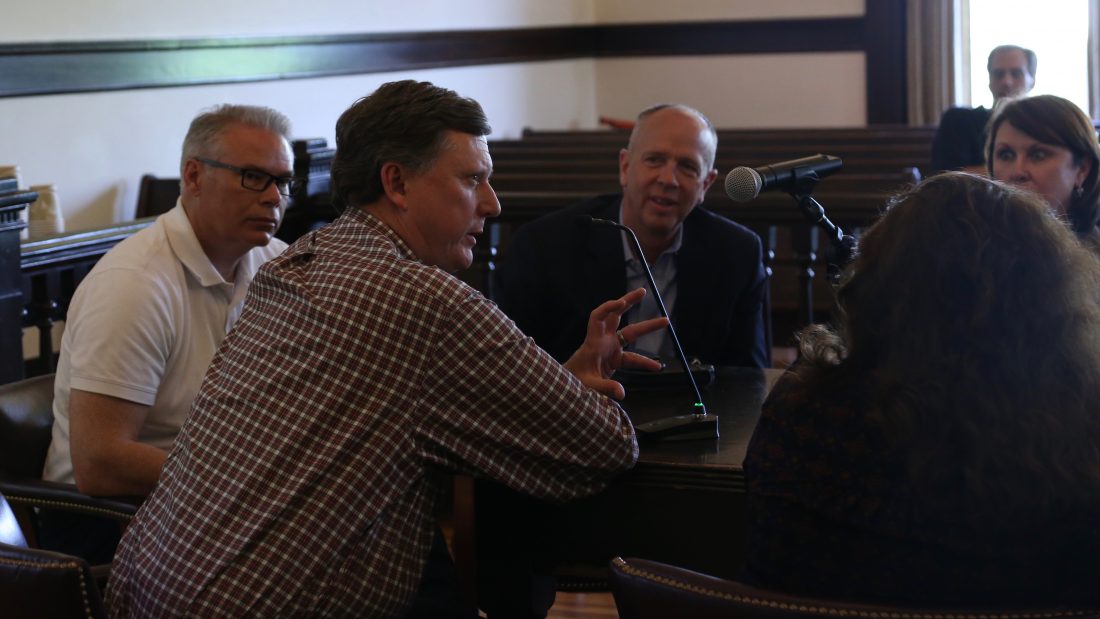 Jason Hess (center), executive director of Heartland RADAC, speaks during a Douglas County Commission work session about plans for the Crisis Intervention Center on May 15, 2019. Facing the camera, left to right, are Mike Brouwer, reentry director for the Douglas County Jail; LMH Health CEO Russ Johnson; and Karen Shumate, former chief operations officer for LMH Health and potentially the future project coordinator and facility design lead for the crisis center. Facing away from the camera at right is Shannon Oury, executive director of the Lawrence Douglas County Housing Authority.

Dixon said that a year ago, she would not have been hopeful that this could happen. But she said there are new leaders in the Kansas Department for Aging and Disability Services (KDADS) and Department of Health and Environment (KDHE) “who really understand the notion of integration and really want to do it, and not just say we’re doing it.”

Jason Hess, executive director of Heartland RADAC, said he agreed that with “fresh faces” at the state who are willing to take a look at something different, the county does have an opportunity to change regulations.

Karen Shumate, former chief operations officer of LMH Health and potentially the future project coordinator and facility design lead for the crisis center, said that if the county is allowed to do what it wants to do with the center, it can develop a more cost-effective system that’s also better for the patient.

“They (state leaders) just have to be able to listen to see — if we can combine things rather than duplicating services, we can save them money and provide the care,” Shumate said.

LMH Health CEO Russ Johnson told the commission that the hospital is in the position of having a large enough size and scope, and with the other partners involved, he sees the hospital’s role in the project as “largely to be the convener, the coordinator, the organizer of this team, and frankly to help make what will surely be some difficult decisions.”

The proposal for project management services includes leadership from LMH Health and ongoing consulting from CXNS Health Strategies, which is a branch of Connections Health Solutions. Bob Tryanski, the county’s director of behavioral health projects, told commissioners that folks with Connections could help provide insight into navigating and changing state regulations.

The commission does not take action during its work sessions.