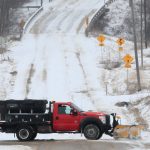 An “unusually severe” winter — including this week’s rain — has Douglas County’s townships struggling to repair roads, and state law says there’s not much the county can do to help.

Townships aim to keep property taxes low by operating with few employees and pieces of equipment, according to an online statement from the county’s director of public works. That approach is usually adequate, the statement says, but severe weather can strain those resources.

Under the county-township system, the county is responsible for rural major and minor collector roads, as well as bridges and large culverts on township-maintained roads, according to the statement, but Kansas law says that townships are fully responsible for their assigned local rural roads.

The statement pleads for patience from township residents, also saying that “the County is looking into alternatives to possibly assist townships in repairing their higher-trafficked roads. This effort will take time.”

Commissioner Nancy Thellman said during the Douglas County Commission’s weekly meeting that she heard from a township trustee who was “beside himself” because the continual wet weather has made it virtually impossible to make roads even passable, far beyond the need for basic maintenance.

She said that on some roads, basically “sinkholes” had started to form. “You don’t see them, either — you get in them, and then you fishtail.”

Thellman said county staff is tentatively planning a work session within the next few weeks, “just to get some communication going on with the township boards … so they know that they’re supported by the county in any way we’re able to, and then maybe we can help point them toward technical help in terms of budgeting for what’s going to be a very expensive season of repair.”

The nine local townships have roughly 500 miles of rock-surfaced roads to maintain, varying from 130 miles in Palmyra Township to 26 and 29 miles in Grant and Clinton townships, respectively, according to the online statement.

The city of Lawrence has a pothole reporting line, 785-832-3456. It also hosts an online form to report pothole locations at lawrenceks.org/public_works/pothole_report_form/.