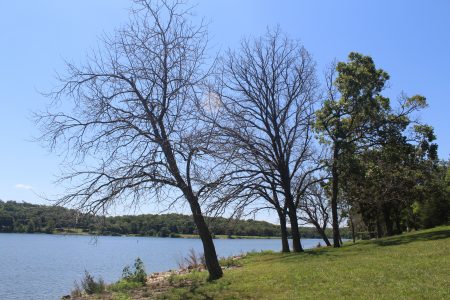 Trees failing to grow leaves stand along the western bank of Lone Star Lake on Tuesday, July 23, 2019. A Douglas County official thinks the trees have been damaged by herbicide poisoning.

About 20 trees near Lone Star Lake have likely been damaged by herbicides, and Douglas County staff plans to remove some of them, a county official recently said in a memo to Douglas County commissioners.

The commission will discuss the issue during its Wednesday meeting and possibly give direction on how to address it.

In a memo to the commissioners, Public Works Director Keith Browning said a concerned resident informed the county that the trees on the west side of the lake near a boat ramp appeared to be suffering from possible herbicide poisoning.

The trees are located above a riprap, which is a rock-lined shore along the lake. Browning said the county used the herbicide Ecomazapyr on the riprap every other year to prevent vegetation growing between the rocks. The riprap was last treated in 2018.

After hearing concerns from the resident, Browning said the county brought in Tom Buller, a horticulturist from Kansas State’s Douglas County Extension Office, to assess the trees. Buller thinks the trees were hurt by the herbicide, but the county may need to send samples of the trees for testing to be sure, Browning said in the memo.

“He thinks that prolonged periods of high water levels in Lone Star Lake this year may have caused deeper migration of the herbicide such that it contacted tree roots,” Browning said of Buller’s assessment. “He said the herbicide can be passed tree to tree via contacting tree roots.”

In other business, the commission will consider authorizing a $111,000 construction contract with Mar Lan Construction to modify offices at 1006 New Hampshire St., the former home of the Municipal Court before the court moved to 1 Riverfront Plaza.

The construction is needed for the county’s Community Corrections and some administrative staff to move into the building. If approved, the contract will allow for increased spending up to 10%, or $11,000, to cover change orders needed for the project.

Along with the contract, the commission will consider extending its lease of the location, which was originally approved in April. In a memo to the commission, county staff said the landlord of the building would provide up to $60,000 of the construction costs if the county chooses to extend its 36-month lease to 60 months.

The commission meets at 5:30 p.m. Wednesday at the Douglas County Courthouse, 1100 Massachusetts St. Full agendas are available online at douglascountyks.org.