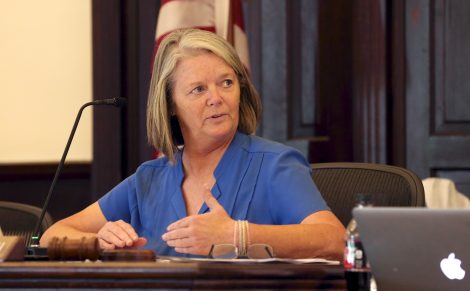 After Douglas County Commission Chair Michelle Derusseau said she did not plan to attend a White House summit, calling it a “publicity stunt,” a member of Republican President Donald Trump’s staff has accused her of partisanship.

The three Douglas County commissioners were invited — along with up to 175 other representatives from the region — to a “State Leadership Day” scheduled for July 25, the Journal-World reported Tuesday. None will attend, and Derusseau mentioned the event during the commission’s July 10 meeting.

The White House is hosting several similar events, but it is paying for neither travel nor lodging, according to the invitation commissioners received. Derusseau — a Republican — said she did not think it was a good use of taxpayer dollars “to go spend three and a half hours for a publicity stunt, as far as I’m concerned … I just really didn’t think, for my time or for our money, that it was worth it.”

A White House official reached out to the Journal-World Wednesday regarding Derusseau’s comment.

“The unprecedented outreach to a bipartisan group of state and local leaders who work to advance some of our most pressing shared priorities like combating the opioid crisis, advancing community revitalization, and supporting America’s workforce can hardly be described as a ‘publicity stunt,'” Meghan K. Burris, director of media affairs for the White House, said in an emailed statement Wednesday evening. “It’s unfortunate that these community leaders are letting partisan politics stand in the way of better serving their constituents.”

Alerted to Derusseau’s party affiliation, the White House did not comment further.

In a phone interview Thursday, Derusseau said she got concerned about the summit when she tried to do some homework on it. She said she’d called the White House, and no one could tell her whom she would be meeting with or what topics would be discussed.

She said it wasn’t a partisan thing, as she is a Republican; she had no information about what to expect, and she couldn’t justify the cost to attend.