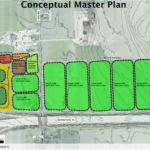 This draft from March 2017 shows the conceptual plan for the Delaware Tribe Agricultural Heritage project.

The Delaware Tribe has abandoned plans to develop as an agricultural heritage center a 92-acre site just northeast of Lawrence.

Chester Brooks, chief of the Delaware Tribe, said the Delaware Tribal Council decided the proposed agricultural heritage center would not produce enough revenue to pay for the $500,000 cost needed to develop the site. The Bartlesville, Okla.,-based tribe instead is now attempting to lease the site to another agricultural user. The property is located along the Kansas Turnpike — just northeast of the turnpike’s interchange in North Lawrence.

The tribe’s preferred option would be to sell the property, Brooks said.

“We had the land and the building on it, on the market for four or five months,” he said. “I don’t think we got one bite, and we reduced the price on it every month.”

The tribe was unable to move forward with a casino because much of the 92-acre site was in the Kansas River flood plain, and because of the unwillingness of the state of Kansas to expand gaming to out-of-state tribes, Brooks said.

“It’s not the fault of Douglas County or anyone there, but the state of Kansas isn’t interested in any non-Kansas tribes getting into gambling,” he said.

Douglas County Commission Chair Nancy Thellman said the county worked with the tribe on ways to develop the property that would benefit the Delaware and the community. The tribe was awarded a $67,700 Douglas County Cultural and Conservation Heritage Grant in 2016 to complete plans for redevelopment concepts that emerged from two years of meetings of tribal representatives, officials and North Lawrence neighbors.

The conceptual plan for the Delaware Agricultural Heritage Center that was shared with the public in 2017 was for the tribe to grow specialty crops on 60 acres at the site as a way to earn revenue. Other elements of the plan were a visitors center, walking trails, high-tunnel crop production, agricultural and research plots and educational plots.

Thellman said she, Douglas County K-State Extension Director Marlin Bates, former county sustainability director Eileen Horn and local business leaders traveled to Oklahoma several times to talk with the Delaware about moving forward with the plan. In the end, tribal leaders couldn’t justify investing in a plan they weren’t convinced would pay for the cost of development.

“I think one big issue was just the distance from Bartlesville to Lawrence,” she said. “One good thing that did come of all this was the real friendships that developed. What started out as a potentially contentious situation ended on very friendly terms.”

Brooks is disappointed the Delaware will not return to Lawrence, he said. He didn’t close the door to renewed interest in the proposed plan if the tribe could secure a grant that would reduce the tribe’s risk.

“If the right grant was available, we would consider it,” he said.