To keep rent flat for tenants, Douglas County will take over management of its own human services facility 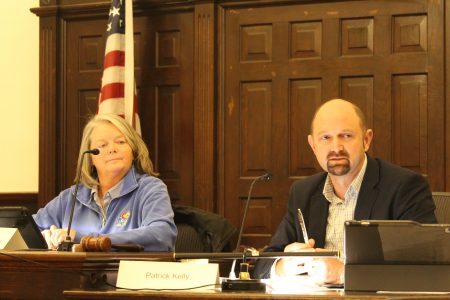 Douglas County Commissioners Patrick Kelly and Michelle Derusseau discuss with county staff a plan for the county to take over management of a facility located at 2518 Ridge Court during a meeting on Wednesday, Dec. 18, 2019.

Douglas County will take over management of a human services facility next year with plans of keeping rent flat for the tenants of the building.

The county-owned facility, at 2518 Ridge Court, is currently managed by the United Way of Douglas County, which is also a tenant.

During its meeting Wednesday, the County Commission unanimously approved making the county government the manager of the building for 2020 instead of continuing with United Way in that role. The commission made the decision after County Administrator Sarah Plinsky proposed that the county operate the building at a lower cost as well as keep tenants’ rent rates flat.

“I want to stay away from increasing rent to the people who are out there,” Commission Chair Michelle Derusseau said. “These are not agencies that I want to be increasing their expenses.”

However, Cornish proposed for the United Way to continue as the manager of the building. He said the organization was well suited for the role because of its established operation and because the county’s mission for the facility aligns with the United Way’s mission.

“We believe we are capable of fulfilling the operational needs of the building as well as the mission, (which is) to strengthen Douglas County health and human services by supporting the sustainability and capacity of social service organizations to provide a trauma-informed community of care,” Cornish said.

But he acknowledged the county would be able to operate the facility at a lower cost.

The county has contracted with United Way to manage the building ever since it began using it as a human services facility.

The possibility of a change of management arose after the United Way approached the county in 2018 requesting to end the contract. The county began working on a plan for the building in light of the United Way’s request.

Plinsky said the county staff considered choosing a different community partner to manage the building for 2020 but ultimately decided it could manage the facility directly. But the United Way later changed its mind about ending the contract, asking in early 2019 to remain as the facility’s manager.

Cornish told the commission that the United Way initially wanted to leave the role because of the cost. He said the organization was using its own funds to cover the building management operation, which contributed to the organization operating at a funding deficit in recent years.

“The previous CEO saw this as a severe detriment,” Cornish said. “We were using those funds instead of providing them to our partner organizations to implement direct services.”

After hearing the proposals, Commissioner Nancy Thellman said taking over the facility could provide the county with the opportunity to put more focus on human services in a cost-effective way.

“It’s certainly not any kind of disrespect to United Way for their years of holding down the fort,” Thellman said. “This is more of an opportunity to step up what this facility might become.”