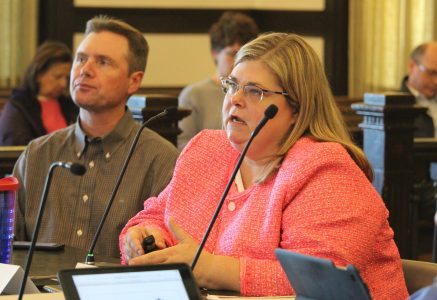 County Administrator Sarah Plinsky, center, speaks to the Douglas County Commission about a plan to expand the Douglas County Jail during a work session on Wednesday, Dec. 18, 2019. Kevin Rawson, of Turner Construction, sits to the left.

A planned expansion of the Douglas County Jail is expected to cost nearly $30 million, and construction could begin as early as March, county leaders learned Wednesday.

Representatives for Turner Construction, the construction manager for the project, told the Douglas County Commission during a work session on Wednesday that they expect the total cost for the expansion to be $29.6 million.

Later in the meeting, members of Justice Matters, a faith-based social activist group, voiced their opposition to the plan.

The current iteration of the project involves adding a four-story tower to the current facility, which would provide between 84 and 112 new beds. Also planned are improvements to the visitation areas and an expansion of the jail’s parking lot.

Dave Dudzik, a project executive, said work could begin by the end of “the first quarter of 2020” and would be finished in late 2021 or early 2022.

County Administrator Sarah Plinsky said she expects the commission to consider giving the project its final approvals next month. She said the commission would also discuss financing options at that time. Plinsky told the Journal-World the county has some funds available to put toward the project immediately, and that it could take on debt to cover the rest. The exact amount the county will put toward the project immediately is not set in stone and will be discussed next month, she said.

Along with the expansion, the county is considering replacing the jail’s central heating and air conditioning plant, which is estimated to cost approximately $1.5 million. That’s not included in the cost estimate for the expansion, and Plinsky said the county already had money set aside for it.

The jail expansion does not include the “step-down” unit that was previously proposed for the west side of the facility. The commission put that portion on hold to allow the Douglas County Criminal Justice Coordinating Council to research alternatives. Plinsky said if the CJCC wants to go ahead with the step-down unit expansion, it will come back before the commission as a separate project.

In early 2019, the county estimated the expansion of the jail would cost between $23 million and $25 million. The new estimated cost is several million dollars higher than that. Turner Construction representative Kevin Rawson said construction costs for jail-related projects have increased between 4% and 6% annually over the last several years, and he expects that trend to continue over the next 18 months.

Plinsky also said the previous estimate was meant to be preliminary, while the estimate provided Wednesday is based off more accurate information researched during preconstruction services.

The county has been exploring an expansion of the jail for several years to address overcrowding in the facility.

County officials recently told the Journal-World that the expansion of the jail is needed to address capacity issues, even though the county has implemented several programs intended to decrease the inmate population. Representatives for Justice Matters said that the county needs to explore more jail alternatives to address the capacity issues before authorizing a multimillion-dollar expansion.

Many members of Justice Matters voiced opposition to the project during the commission’s regular meeting Wednesday. Several of them noted that county residents previously voted against a half-cent sales tax for the project in 2018.

“We, too, are concerned about the human and financial costs of (the) recent explosion of incarceration,” said Katie Hobson, a member of the organization. “However, we disagree to our very core to the current plan and timeline to add jail cells to lock up more people.” 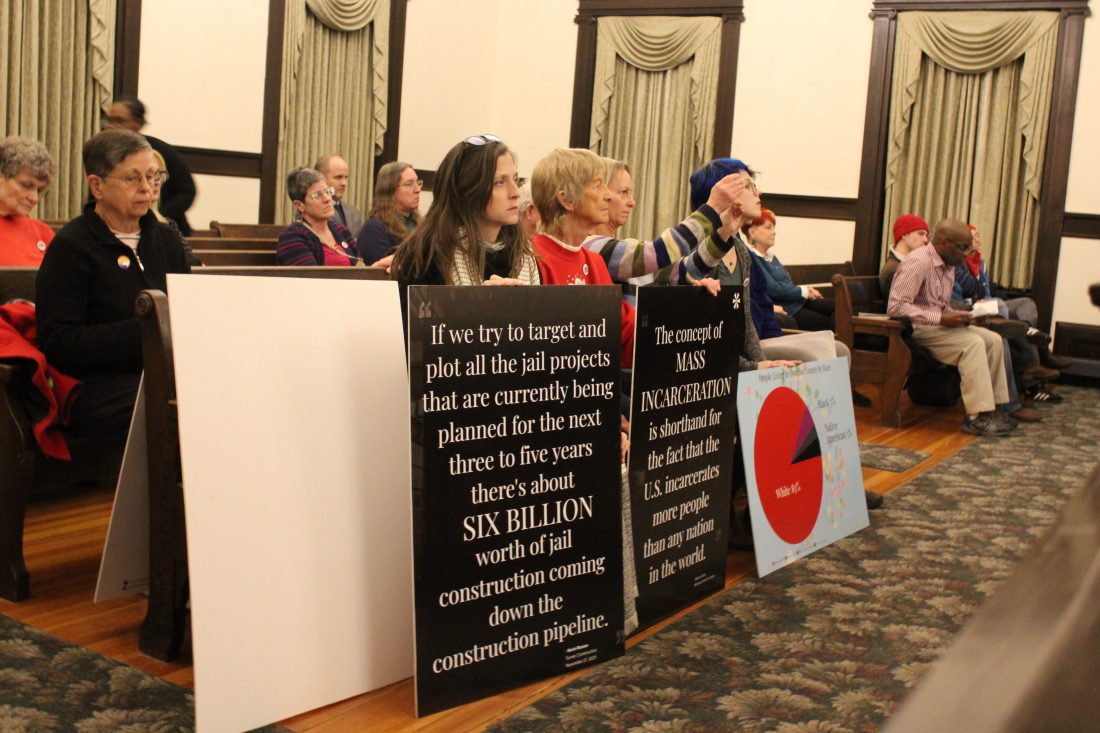 Members of Justice Matters hold up signs protesting the expansion of the Douglas County Jail during a Douglas County Commission Meeting on Wednesday, Dec. 18, 2019.