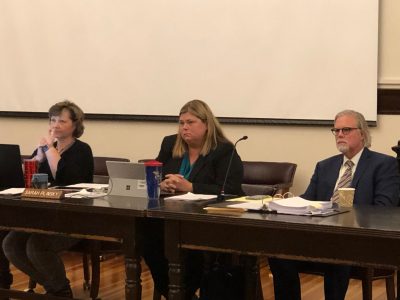 The Douglas County Commission will forgo a search to fill its vacant county administrator position and will instead appoint interim County Administrator Sarah Plinsky to the permanent position.

Plinsky has been serving as the interim county administrator since December, when the previous administrator, Craig Weinaug, retired after working for the county for 26 years. When Weinaug left the position, he said the county would conduct a search to find his replacement.

But last week, commissioners Michelle Derusseau and Nancy Thellman said they wanted to hire Plinsky without a search. Commissioner Patrick Kelly asked to hold off until the public could weigh in.

During the meeting Wednesday, the commission heard from several county residents who supported Plinsky’s appointment. None who spoke voiced opposition to her appointment.

Before the commissioners made the decision, Kelly asked Plinsky if she was interested in the position.

“It would be my distinct honor and pleasure,” Plinsky said.