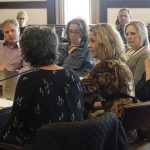 Before she came to Douglas County, Shannon Bruegge, behavioral health parole officer, worked for eight years in Cass County, Mo., supervising clients with substance use disorders as part of a drug court.

Bruegge was hired with the 2017 launch of the county’s behavioral health court, which aims to reduce the number of people with serious mental illness in the Douglas County Jail and provide support to them. Now she and others in the county’s criminal justice system are pushing for another specialty court that would focus on helping those with substance use disorders.

Bruegge shared how the Cass County drug court functioned and answered commissioners’ questions about logistics. The drug court that criminal justice services staff members are proposing for Douglas County would be very similar.

Participants work to complete four phases of the program over 16 to 18 months. The intensity and level of supervision decreases as participants advance through the program. They’re required to submit to random drug tests and meet with their parole officers regularly and to follow an individualized treatment plan that’s developed at the beginning of the program. The program offers people support and helps them find jobs.

Douglas County Commission Chair Michelle Derusseau asked Bruegge what the court did for violations of its rules or of participants’ probation. Bruegge said the court had escalating sanctions, and participants were warned upfront. Plus, Bruegge and the judge would sometimes tell participants that they weren’t going to give up on them and send their cases back to the criminal dockets, she said.

“A lot of our folks said, ‘Nobody ever believed in me,'” Bruegge said. “‘Nobody ever pushed me because they just thought I would fail.'”

She said the Cass County drug court mostly accepted felony cases so that participants would have a “buy-in factor.” She said people know that having a felony on their record could negatively affect their futures, and that knowledge could help them stay motivated to work hard.

There’s also a lot of peer interaction, and many participants form close bonds. There are “alumni groups” of program graduates who support one another and even work together to hold fundraisers, Bruegge said — that way, those who don’t have anyone outside of the program can still be part of that “family” once they’ve graduated.

“I think for a lot of people in the criminal justice system, they see it as us versus them, and that changes when you have a drug court,” Bruegge said.

Commissioner Nancy Thellman asked how the court would work with individuals who have co-occurring substance use disorders and mental illness, and also asked why the behavioral health court and drug court couldn’t be combined.

Branson said that when his office determined where a case should go, it tried to determine the person’s “primary driver” and the most important thing that needs to be addressed first — sometimes that’s substance use, sometimes it’s mental illness, he said.

Another part of the reason is potential for burnout among judges and staff. Specialty court cases are more time-consuming and can be the source of a lot of overnight phone calls — “addiction doesn’t stop after 5 o’clock,” Bruegge said.

But she said the impact on people’s lives could carry into future generations because addiction “tends to follow families,” and kids’ lives can change when their parents get clean.

“I believe in recovery, and I believe that our community owes it to the people that can’t get out of the darkness on their own, and we need to be the light and be a resource,” Bruegge said. “And if they stay with it, they won’t stay involved in the criminal justice system. It just goes hand in hand.”

There are some different models of delivery for a drug court. The next step will be for the county’s Criminal Justice Coordinating Council or a subcommittee to review the models and determine the best model for Douglas County. The CJCC next meets on May 14, then June 11.

As the Journal-World reported, commissioners on Wednesday indicated that they would be open to including a pilot drug court program in next year’s budget, which has to be finalized in August. Branson estimated that a small pilot program could help 15 to 20 people in the beginning, and that group could help determine what the program’s capacity could be in the future.