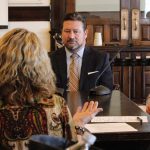 A key player in the Douglas County criminal justice system on Wednesday told county commissioners that he is “fully in support” of a drug court — “but I don’t think that’s the place where we ought to be stopping.”

Douglas County District Attorney Charles Branson said he wants to “take a little bit higher view” of the programs the county has already initiated to reduce rates of incarceration, such as behavioral health court and pretrial release services, and how a drug court and “other programs that may potentially be out there that we should be bringing on board at the same time” could work in conjunction.

“This is a slice of the things that we want to do — and I say we; at least I want to do — but I think there’s other things out there that there’s interest in doing,” he said, “and I want to know, what’s the commissioners’ take on that?”

During their Wednesday work session, commissioners heard a basic overview of how a drug court could function in Douglas County. In her presentation, Pam Weigand, director of criminal justice services, explained that people who are arrested would be screened for drug court eligibility.

From there, Weigand said participants in a drug court would work through phases for about 16 months with a team of supporters, both from the legal system and substance use treatment experts. If they successfully completed the program, they could potentially have their charges dismissed, thereby avoiding a worse criminal record and the various life complications that can accompany it.

“We’ve been very open-minded, but we also can’t do everything at once,” Douglas County Commission Chair Michelle Derusseau said in response to Branson’s question on the commission’s stance. “If there’s other ideas out there we need to take a look at and be able to prioritize and see where we want to start — to me, it would be which ones would have the most impact and how many people can we touch.”

Branson said the county had already touched the large populations — the smaller, more difficult populations now in focus take more work and more resources, he said, but there’s also a lot of potential for reward because some of those populations utilize the criminal justice services the most.

He also mentioned an “enhanced diversion” program he’d like to offer from his office. He said some cases aren’t right for a regular diversion program, in which participants largely self-report when they’ve completed evaluations, community service and so on, in order to avoid conviction. Enhanced diversion would aim to help those who are charged with a period of supervision to set them on the right path, without going to the extent of probation.

“I think there’s a lot of other programs out there that we have an opportunity to take a look at and figure out — OK, drug court may be a piece of the puzzle, but what does the whole picture look like?” Branson told the Journal-World after the meeting.

There are a few ways that a drug court could function. Interim County Administrator Sarah Plinsky suggested that next, the county’s Criminal Justice Coordinating Council could look closer at proposals and do more analysis to make a recommendation to commissioners. The CJCC next meets on May 14, then June 11.

Though commissioners took no action during the work session, they indicated that they would be open to including a pilot drug court program in next year’s budget, which has to be finalized in August. Branson estimated that a small pilot program could help 15 to 20 people in the beginning, and that small group could help determine what the program’s capacity could be in the future.

• The commission approved allowing Plinsky to execute a lease agreement with Berkeley Plaza Inc. for the former Lawrence Municipal Court building at 1006 New Hampshire St., for a monthly rate of $10,767.

• Commissioners voted to approve bids for abatement, $48,450, and demolition, $97,564, of the former public works building at 1242 Massachusetts St. Before any of that work can begin, however, Plinsky said the county will need to work with city of Lawrence staff and the Historic Resources Commission.