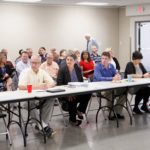 Lawrence mayor Stuart Boley’s proposal to explore merging the city and county governments didn’t go over well with Douglas County commissioners on Wednesday, but the county leaders said they were willing to review existing shared funding agreements with the city.

Caught off guard by the topic, Douglas County Commission Chair Nancy Thellman asked Boley if the City Commission had discussed unification before or developed any written position on the subject.

Boley acknowledged there was no such background.

“It originated with me, and my interest in the budget,” he said. “… I think we need to consider the interest of our taxpayers and (whether unified government could) provide opportunities for economies of scale.”

Boley proposed that the county’s state legislative delegation could explore the idea of merging the two governments — both to act as neutral observers and because unification would likely require some legislative action.

Two other members of the City Commission, Lisa Larsen and Leslie Soden, said they, too, had considered unification. Larsen said the issue had come up before in conversations she’d had with city administrative staff and department heads.

County commissioners, however, were reluctant to take on a project much more complex than defining city and county roles in the existing agreements. Thellman said that was especially true with the county looking to find a new county administrator and Lawrence having to search for a new city manager. County Administrator Craig Weinaug has announced he will retire in December, and Lawrence City Manager Tom Markus announced Tuesday that he would resign in spring 2019.

Commissioner Michelle Derusseau said neither she nor the rural western Douglas County residents she represented had an interest in unified government. She said the county’s diversity made the prospect of unified government much different from the mostly urban Wyandotte County and extensively rural Greeley County, the two counties in the state with unified government.

Boley said that, even if unification was not on the table, the city and county still needed to examine their existing agreements and decide the proper role of each jurisdiction in the delivery and funding of the services provided, Boley said.

That was acceptable to county commissioners, and Thellman suggested the city and county staffs be directed to work together to develop an equitable plan.

The first hour of the joint meeting was dedicated to discussion of how the city, county and Lawrence school district could work together to expand mental health and substance abuse services to children in the community.

Bob Tryanski, county director of behavioral health projects, said one of the valid criticisms of the behavioral health initiatives the county has already undertaken is that they are all geared toward adults. He suggested that an advisory board with representatives from the city and the school district could be created to provide direction on how to expand services to children.

No action was taken on Tryanski’s suggestion at the meeting.

Lawrence school board President Jessica Beeson said the conversation about enhanced behavioral health services has already started among the four county school districts. She said the superintendents of the Lawrence, Baldwin City, Eudora and Perry-Lecompton districts had already scheduled a meeting for Oct. 12 to explore gaps in services for children.