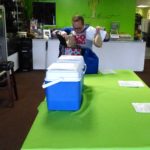 In this Journal-World file photo from March 24, 2017, Ryan Desch, a volunteer with the Senior Resource Center for Douglas County's Senior Meals program, prepares meals for delivery.

It is “no big deal” that the Senior Resource Center for Douglas County will stop delivering meals to the homes of county seniors at the end of the year, the head of the agency says.

That assessment isn’t a dismissal of the needs of the roughly 125 seniors who receive the meals, but an acknowledgement that there are better ways to meet their nutritional needs, said Marvel Williamson, executive director of the Senior Resource Center. She and the agency intend to develop the best plan for seniors to access food from the multiple sources available in the county.

Williamson said the center’s Senior Meals program enlists volunteers to deliver meals to seniors Monday through Friday throughout the county. A nominal donation is asked for the meals, but no one is denied service because of an inability to pay.

The Senior Resource Center made the decision to end the Senior Meals program in response to the Douglas County Commission cutting its annual budget by $50,000 for 2019. Williamson told commissioners at a June budget hearing that the meals program had serious problems, including a decline in participation from 41,233 delivered meals in 2014 to 28,260 in 2017. The current level is below the break-even point in the contract for the food preparers, she said.

Williamson told commissioners the agency wasn’t going to simply walk away from the program. As part of the agency’s mission to be the resource clearinghouse for seniors in the county, she said it would work to ensure the seniors were connected to more food options in the county. Those include community food banks, restaurant and grocery store home deliveries, and ECKAN food distribution.

About 30 to 40 of those in the Senior Meals program are dependent on the service because of serious income issues or social isolation, Williamson said; the rest participate because it’s convenient. But regardless of the circumstances of those in the program, Senior Resource Center staff plans to meet with all those now receiving home-delivered meals.

“That work will begin this fall,” she said. “We’re meeting with every single person we serve to figure out a plan to get them food.”

Williamson said the Senior Resource Center has already started working with agencies that will help fill any gaps left with the demise of Senior Meals — including Just Food, the Jayhawk Area Agency on Aging and Lawrence Meals on Wheels — about how to best serve the current Senior Meals clients.

Once Senior Meals is gone, the Senior Resource Center will continue to play a role in the regular home delivery of food, Williamson said.

“We have an extensive volunteer base,” she said. “Our volunteers will still be delivering food, but just from a different source.”

Just Food will be one of those sources, said Elizabeth Keever, the food bank’s executive director.

“We are excited to be partnering with them to fill this need,” she said. “One thing we will be capitalizing on is the Senior Resource Center’s volunteer manpower that can bring seniors into the market or deliver food to them. It’s really an opportunity to get seniors fresh food on a daily basis.”

Even seniors who are not homebound can “shop” for free food at the Just Food market, 1000 E. 11th St., Keever said.

“We just opened a satellite location at Prairie Ridge Place Apartments in May,” she said of the new site at 2424 Melrose Lane. “There’s many ways for seniors to shop at Just Food.”

Keever said Just Food was currently expanding a federally funded senior commodities program that provides monthly boxes of staples, such as milk, canned meats, cheese, cereal, rice and fruit to county residents 60 and older who have an income of less than $1,316 a month.

“We’re signing people up for that now,” Keever said.

Kim Culliss, executive director of Lawrence Meals on Wheels, said the agency has also signed up new seniors in recent weeks after the Senior Resource Center said it would end its home-delivered meal program.

“We’re getting calls, and we are starting them as quickly as we can,” she said. “We were surprised and disappointed they were discontinuing the service.”

The Senior Resource Center’s Senior Meals program and Lawrence Meals on Wheels both deliver noon meals Monday through Friday in Lawrence. Culliss said the difference between the two programs is that Meals on Wheels delivers exclusively to Lawrence and provides meals prepared by LMH Health, formerly known as Lawrence Memorial Hospital, for those on dietary restrictions. The meals are available only to the homebound or those who have a spouse who is homebound.

Senior Meals does not have the strict homebound qualification and delivers in Lawrence, Baldwin City, Eudora, Lecompton and rural areas of Douglas County.

Culliss said the Meals on Wheels program will look at expanding beyond the Lawrence city limits to provide service in the Baldwin City and Eudora areas with the demise of Senior Meals.

“That’s something we are going to explore when our board meets this month,” she said. “The seniors who are homebound — they are our biggest concern. But we are Lawrence Meals on Wheels and have been for 48 years.”

Lawrence Meals on Wheels also has been fielding calls from those fearing its home deliveries were ending, Culliss said.

Susan Harris, executive director of the Jayhawk Area Agency on Aging, said there was the possibility the agency could provide funding to help Lawrence Meals on Wheels expand its service.

The Senior Meals program is funded in part with a federal grant the Jayhawk Area Agency on Aging administers, she said. The agency will release a request for proposals from other agencies interested in securing the grant funds for home-delivered senior meals in Douglas County, she said.

“We’re working on getting another provider,” she said. “Certainly, we want to do what’s best for Douglas County.”