Douglas County clerk planning for recount in GOP gubernatorial primary; here’s how it would work 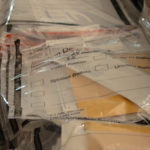 Ballots are stacked at the Douglas County Courthouse on Tuesday, Aug. 7, 2018.

Colyer and Kobach will have until Friday to request a recount, Shew said.

“We will have five days to complete the recount,” he said. “If there’s a recount, we’ll probably start on Saturday.”

The candidate requesting a recount can ask that it be done by hand or by machine, Shew said. The hand count would be more expensive because it would take longer and would require the clerk’s office to hire more poll workers to help with the process.

Shew said that on Tuesday he would send the Kansas Secretary of State’s Office the county’s cost to conduct a recount by hand and by machine. Those cost figures and those of other counties in the state would determine how much bond a candidate would have to post when requesting a recount, he said.

There could be a recount that doesn’t involve Douglas County, because a candidate could request that the recount be done in specific counties, Shew said. Any recount in Douglas County wouldn’t be about overturning the result in the county, which Colyer won by a margin of about 1,800 votes, but about picking up a few votes in the tight statewide race.

Shew’s top-of-the-head estimate was that a machine recount would cost about $2,000, but he said it would take him longer to develop the cost of a hand count because that is something the clerk’s office no longer does, Shew said.

In fact, the whole recount process is new to the office.

“In my 14 years in office, we have never had a recount,” he said. “We’ve had some close elections, but the candidates chose not to request a recount.”