Douglas County has at least 500 ballots, and maybe as many as 800 ballots, left to count in primary election 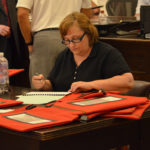 There are potentially more than 800 votes yet to be counted from Tuesday’s primary in Douglas County, according to numbers from the Douglas County Clerk’s Office.

That means Douglas County alone has enough uncounted ballots to swing the gubernatorial race between Gov. Jeff Colyer and Secretary of State Kris Kobach, who are separated by less than 200 votes statewide. Douglas County is just one of 105 counties in the state, and all of them are expected to have some number of uncounted ballots.

Douglas County Clerk Jamie Shew said his office sent out 1,100 mail-in-advance ballots. He said 790 of those already had been returned and counted before polls closed on Tuesday. But state law allows advance ballots to be counted if they are postmarked by Tuesday and received by the election office by Friday. That means another 320 potentially could be returned and counted.

A larger number of uncounted ballots were those cast provisionally on Tuesday at polling sites. Shew said his office had yet to count about 500 provisional ballots, which are ballots that are cast because the voter may not have had proper ID, a discrepancy with an address, or other such issues. A canvassing board made up of local officials ends up deciding which ballots are eligible to be counted.

“Historically, about 80 to 85 percent of those get counted,” Shew said. “Provisional ballots are usually cast because of a change of address. If the voter can show that, the ballots will get counted.”

Shew said he didn’t know how the provisional or outstanding advance ballots broke down in regards to party affiliation. The uncounted GOP ballots are likely, statistically speaking, to break Colyer’s way because he received 51 percent of the Douglas County vote Tuesday compared to Kobach’s 30 percent.

Plans call for all ballots to be counted by Thursday, Aug. 16, when the canvassing board will certify the election results.