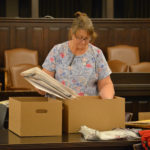 More than 18,500 voters participated in the primary for a turnout of about 24 percent. The turnout number isn’t known because advance ballots the Clerk’s Office receives by Friday will still be counted in the election.

But Shew won’t need to see final numbers to know this year’s primary election had by far the best turnout of a primary election. The previous record was the 13,709 who voted in the August 2004 primary, he said.