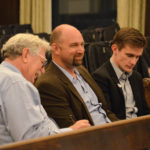 Kelly led throughout the night Tuesday as votes were tallied in the Douglas County Courthouse and finished the night with 53 percent of the vote. A political newcomer, Kelly received 2,014 votes. Lawrence City Commissioner Leslie Soden was second with 1,263 votes and Lawrence insurance agent John Magnuson third with 513.

With the victory, Kelly, who is the director of the Lawrence College & Career Center, appears set to succeed current 1st District County Commissioner Mike Gaughan in the position that represents most Lawrence neighborhoods north of 19th Street and west of Massachusetts Street. Kelly will have no opponent on the November general election ballot.

Kelly said voters responded to the message he shared with them during his last two months of door-to-door campaigning.

“Our promise was to give Douglas County principled and inclusive leadership,” he said. “That is what we were about.”

Kelly said he’ll stay actively engaged in county issues in the five months before taking office in January. He’s also planning to take the time to further meet with residents of the district door to door, although he has no apparent opponent in the November election.

“I will certainty take that time to reach out and assure all the people of Douglas County who do not feel they are represented that I will serve them to the best of my ability,” he said.