City compost facility to reopen on Saturday with new guidelines 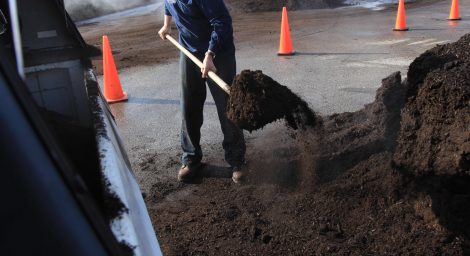 In this file photo from March 2012, a Lawrence resident manually loads his truck at the city’s compost facility, 1420 E. 11th St.

The City of Lawrence has announced it will reopen its compost facility on Saturday with new safety guidelines.

Under the new guidelines, a maximum of 15 customers will be allowed at any given time in the facility, 1420 E. 11th St, according to a city news release. Customers should stay 6 feet away from one another at all times, and the city recommends they wear face coverings and gloves and follow Centers for Disease Control and Prevention recommendations.

The facility will be open Saturdays from 9 a.m. to 3 p.m. to Lawrence residents for self-loaded pickups of wood chips and/or compost or drop-off of brush and yard waste. All services will be free until further notice. Customers must bring tools, such as shovels or pitchforks, for loading. Pieces of personal motorized loading equipment such as skid-steers are not allowed.

The customer limit means that long wait times are expected, and the city encourages residents to arrive early. City staff reminds residents not to stop their vehicles on the railroad tracks near the facility entrance. The facility gates will close promptly at 3 p.m., and customers who have not entered the facility will be asked to return the following Saturday.