Moran voices support for liability protections for colleges reopening from COVID-19, says he would support a narrower stimulus bill 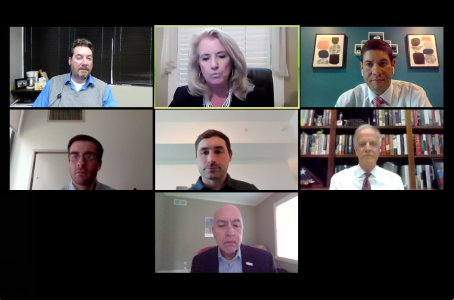 photo by: Screengrab via Zoom

U.S. Sen. Jerry Moran, R-Kan., middle right, speaks to members of the Lawrence Chamber of Commerce on Tuesday, May 12, 2020.

If colleges and universities in Kansas can host in-person classes in the fall, they should also be given protections against potential lawsuits over their reopening procedures, U.S. Sen. Jerry Moran, R-Kan., said Tuesday.

At a virtual town hall with members of the Lawrence chamber of commerce, Moran also said he was strongly in favor of opening all educational facilities in the fall, including K-12 schools, and that the liability protections would prevent universities from having to spend their limited time and resources defending their reopening decisions in court.

“If a university follows the guidelines and operates in good faith to have classes in the classroom … if you follow the rules and follow the guidance, I don’t think we want to spend our time litigating whether universities did the right thing (in reopening),” Moran said.

The topic arose at the town hall after a question from KU federal lobbyist Jack Cline.

Liability protections for businesses, hospitals and other organizations that are reopening have been a sticking point in drafting a new round of federal stimulus legislation in recent days. One of their most vocal proponents is Senate Majority Leader Mitch McConnell, who has warned of a possible “epidemic” of COVID-19-related lawsuits as the economy opens back up.

Higher education hadn’t been at the forefront of that discussion, but Moran said it deserves those kinds of protections, too.

“I think it would be an even greater challenge for (the) future of education if we are unable to be in classrooms on campuses for another semester or another year,” Moran said. “We would want to be helpful to businesses and the universities who do things right to avoid spending their days in court.”

Also during the town hall, Moran said he would be in favor of allowing 501(c)6 corporations — or business organizations like the chamber of commerce — to qualify for small business loans, including the Paycheck Protection Program, which was created in earlier COVID-19 stimulus legislation.

“Most everything we’ve done (in Congress) has been directed at health and well-being, but also economic well-being,” he said. “I want to make certain not-for-profits are included in (the) PPP program.”

House Democrats on Tuesday introduced a fourth stimulus plan in the form of a wide-ranging, $3 trillion legislative package that included direct aid to local and state governments, a second round of direct payments to U.S. taxpayers, and funding national vote-by-mail measures for the November general election.

Moran said that while he supported additional efforts to stimulate the economy, he wanted to prioritize fine-tuning the measures enacted by the first three rounds of stimulus packages. Republicans, he said, generally expect the fourth stimulus package to be slower-moving and narrower in cost than previous legislation.

“There is a different attitude toward $3 trillion in spending between Democrats and Republicans,” he said. “I think we’re going to be much more cautious in what we’re spending money on.”