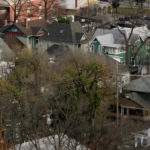 Houses in a neighborhood just west of downtown Lawrence are shown in this file photo from November 2011.

There are more than 20,000 rental properties in the City of Lawrence, but there is very little chance any one of them will be inspected.

Last year, of the 21,174 rental units that were licensed by the city, only 206 were inspected, or less than 1%, according to the city’s annual rental licensing and inspection report. After Commissioner Courtney Shipley pointed out that the regulations the city is developing for Airbnbs and other short-term rentals seem stiffer than regulations for long-term rentals — where more than half of Lawrence residents live — the commission will soon receive a report on the overall program.

Shipley, who is a property manager, said it’s time for the city to reassess the program. She said that includes increasing the number of inspections, as well as other potential changes to make sure the program works well for both landlords and tenants.

“It would be good to see an overall revisiting of it, of where it’s weak and where it’s strong,” Shipley said.

The small number of inspections is due in part to the format of the program, which was set up in its current form in 2014. The program only requires 10% of a landlord’s rental units to be inspected every three years, and successful inspections further reduce that inspection schedule. Specifically, landlords whose properties have fewer than five violations per unit qualify for a six-year inspection cycle instead of the three-year cycle. In the first cycle of inspections, more than 90 percent of landlords qualified for the six-year cycle, meaning that the program’s second cycle of inspections, taking place from 2018 to 2020, requires substantially fewer inspections.

This is not the first time the city’s rental program has been questioned. After a 2018 survey found a quarter of renters rated their housing condition as poor, then-City Manager Tom Markus, who had more than 40 years of experience in municipal government, told commissioners that Lawrence had the “least aggressive” rental inspection program that he’d ever worked with. Though some commissioners expressed interest in 2018 in strengthening the program, as the Journal-World reported, no changes were made. At that time, the most recent inspection report, for 2017, indicated that about 5% of rental units were inspected that year.

Shipley, who was formerly the chair of the Lawrence Association of Neighborhoods, said her concerns about the program arose in part because she has heard about people having issues with their rentals. She said some renters feel their complaints and repair requests are not adequately addressed, and she thinks the city has a role to play in ensuring landlords and property management companies take care of their rentals and their tenants.

“We have to provide protections for people,” Shipley said.

Shipley, who manages one property in Lawrence, said personally she found the inspection process straightforward, but wanted to make sure that the responsibilities of landlords and the rights of tenants are clear and accessible for all involved. She would also like to discuss whether it is possible to include a provision that would explicitly bar landlords from retaliating against tenants for making a complaint. Shipley asked whether the inspection rate should be the same across the board, or whether property managers with a substantial amount of units should have a higher percentage of their units inspected.

There are undoubtedly some property management companies that own multiple apartment complexes and rentals in Lawrence, but the rental report does not go into detail in that regard. The report notes only that the 21,174 licensed dwelling units were held under 6,084 rental licenses.

Other aspects of the report provide information on the violations identified by the program. In 2019, the 206 initial inspections — which led to 134 re-inspections — identified 345 violations, according to the report. It says that smoke alarms and ground-fault circuit interrupter receptacles, a safety feature in electrical outlets, continue to be the most common violations. In 2019, 92.4% of units inspected qualified for the six-year inspection cycle.

The report does acknowledge the small sample size, but indicates the program has been successful in finding violations over the years. The report notes that since the expansion of the rental inspection program in 2014, that staff has cited 9,910 code violations in total. In the conclusion of the report, staff states that it believes the program continues to be valuable.

“Staff believes the program, since its inception on July 1, 2014, continues to yield valuable, measurable, and positive statistical data that clearly demonstrates the program has a valued and important purpose in the community even in its relatively small sampling of rental properties throughout the city,” the report says.

The city staff report requested by Shipley about the overall program was originally scheduled to be presented on April 7, but has been postponed due the coronavirus pandemic. Some commissioners recently asked that a timeline be created for the postponed policy decisions, and a date for when the topic will go to the commission is likely forthcoming.