City leaders have approved changes to the city’s no-camping rules to be more accommodating to homeless people when local shelters are full.

As part of its meeting Tuesday, the Lawrence City Commission voted 4-1, with Mayor Jennifer Ananda opposed, to add an exemption to the city ordinance that currently makes it illegal to camp on public right-of-way. The exemption, aimed at decriminalizing homelessness, would allow people to camp on any public right-of-way or public property downtown when there is no available space at the overnight homeless shelters, according to a city staff memo to the commission.

Assistant City Attorney Maria Garcia said in an email to the Journal-World that the exemption applies only to public property located in the downtown commercial district, not public property generally or the public right-of-way. Garcia also clarified that the city’s no-camping ordinance and the exemption do not apply to city parks. City code has a separate section that prohibits people from being in public parks after certain hours and that section of code was not part of Tuesday’s discussion. In response to questions from the commission Tuesday, Garcia said there are 24 city-owned properties downtown where the exemption would apply, including public parking lots and property north of the Kansas River bridge.

The commission received correspondence from about 30 residents regarding the potential changes, some of whom said the changes didn’t go far enough and the city needed to do more to help the homeless and others who said allowing homeless people to camp or sleep downtown created health and safety concerns.

Vice Mayor Brad Finkeldei said he thought that residents of all opinions, the commission and social service organizations shared the goal of providing housing for the homeless, and he thought the ordinance at least moved the problem away from the police and more into the hands of the commission.

“We could have a unified goal here,” Finkeldei said. “And that goal shouldn’t be more people camping downtown, but it should be a goal of getting people housed.”

Commissioner Stuart Boley said the city also needed to align its ordinances and code with applicable law. A memo to the commission from the city’s legal department stated that the proposed changes would be consistent with recent federal court rulings concerning no-camping ordinances.

In December, the U.S. Supreme Court declined to hear an appeal in a case from Boise, Idaho, which had found local laws against homeless camping violated the U.S. Constitution’s Eighth Amendment prohibition of cruel and unusual punishment, according to national media reports. That action let stand a ruling from the Ninth Circuit Court of Appeals, in San Francisco, that struck down laws against camping on public grounds when no room is available at homeless shelters. Though Kansas is in the 10th Circuit, the memo states that courts here would likely strongly consider the Ninth Circuit opinion if a similar issue were raised. 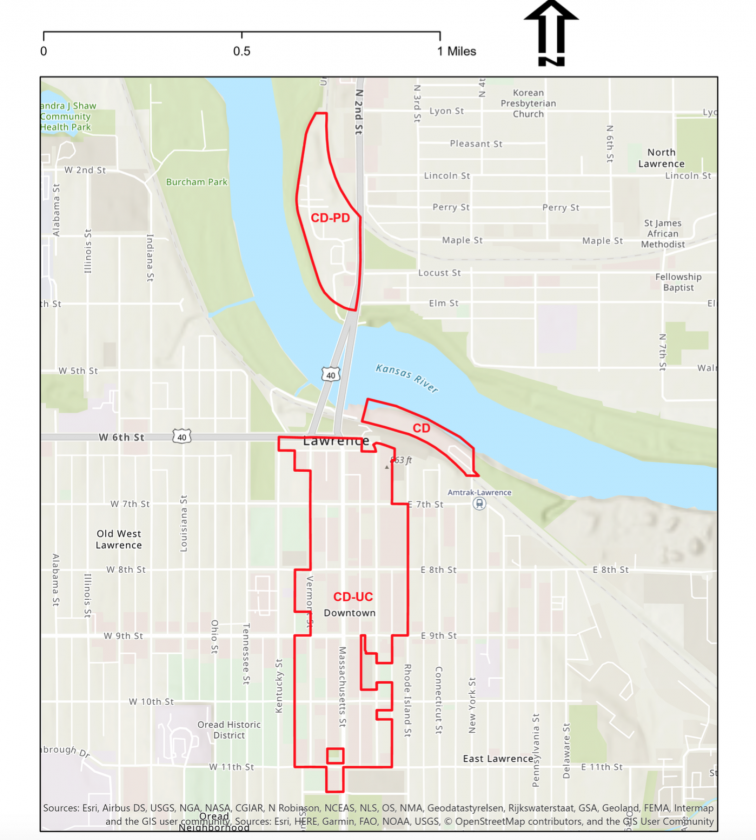 A City of Lawrence map shows the three areas that comprise the downtown commercial district, the district where the no-camping exemption would apply when overnight shelters that serve the homeless are full.

Concerns about the city’s no-camping ordinance came to the commission after a group of residents and some homeless people spoke out against the ordinance, saying that it gave the city cause to police, ticket and clear the campsites of homeless people who have no other choice but to sleep outside because local overnight shelters are at capacity.

Ananda, who voted against the ordinance exemption, indicated she was interested in even broader changes. Ananda has advocated for decriminalizing certain nonperson crimes and reevaluating the role of police; she instead asked city attorneys Tuesday about the possibility of removing the ordinance altogether from the criminal section of city code. Ananda said that perhaps the no-camping ordinance should be part of the larger conversation the commission is preparing to have and that the city should consider what it spends to prosecute people who violate the ordinance and whether that money could be spent more directly addressing the problem.

In other business, the commission voted unanimously to move forward with changes to increase the capacity of temporary cold weather shelters. Currently, city ordinance limits occupancy of temporary shelters at churches or other religious organizations to 15 clients and five staff members, or 20 people total, for a maximum of 120 days annually. The commission did not decide on a new capacity limit, but asked city staff to bring back more information about what capacity limits should be based on fire and safety considerations such as square footage and the number of exits a building has.