photo by: Gould Evans/City of Lawrence

This temporary layout for the 900 block of Massachusetts Street in downtown Lawrence is proposed in response to concerns related to social distancing and the COVID-19 pandemic. Existing angled parking spots would be converted into parallel parking spots (highlighted in yellow), or space that could be used for pedestrians, outside dining or retail sales (highlighted in green).

City leaders have voted to approve code changes that would allow downtown businesses to expand their operations into what are currently angled parking spots, but exactly what that downtown layout will look like and how much parking will be retained is not yet decided.

Late Tuesday, during a meeting that stretched into early Wednesday morning, the Lawrence City Commission voted 3-2, with commissioners Lisa Larsen and Stuart Boley opposed, to approve a resolution that allows businesses to use the city right-of-way that is currently angled parking spots along Massachusetts Street. The resolution is needed for the city to put in place a new, temporary layout for downtown in response to the COVID-19 pandemic that is meant to provide more room for pedestrians to practice social distancing and for businesses to serve customers outdoors.

The city has gotten a mixed response from downtown business owners, with some saying that taking away some of the parking on Massachusetts Street may help restaurants that want to use that area for dining but will hurt retailers. Vice Mayor Brad Finkeldei said that there needs to be space for people and businesses to spread out if more people are going to feel comfortable coming downtown. Finkeldei said it’s possible some people may stay away from downtown because there is less parking along Massachusetts Street, but that the risk of doing nothing to address health and safety amid the pandemic was greater.

“I think that (change) is a risk and that taking risks is hard, but I also think doing nothing and just hoping people come back down to downtown is a much, much bigger risk,” Finkeldei said. “A risk that will cause many of our businesses to fail. So I do think we need to do something different.” 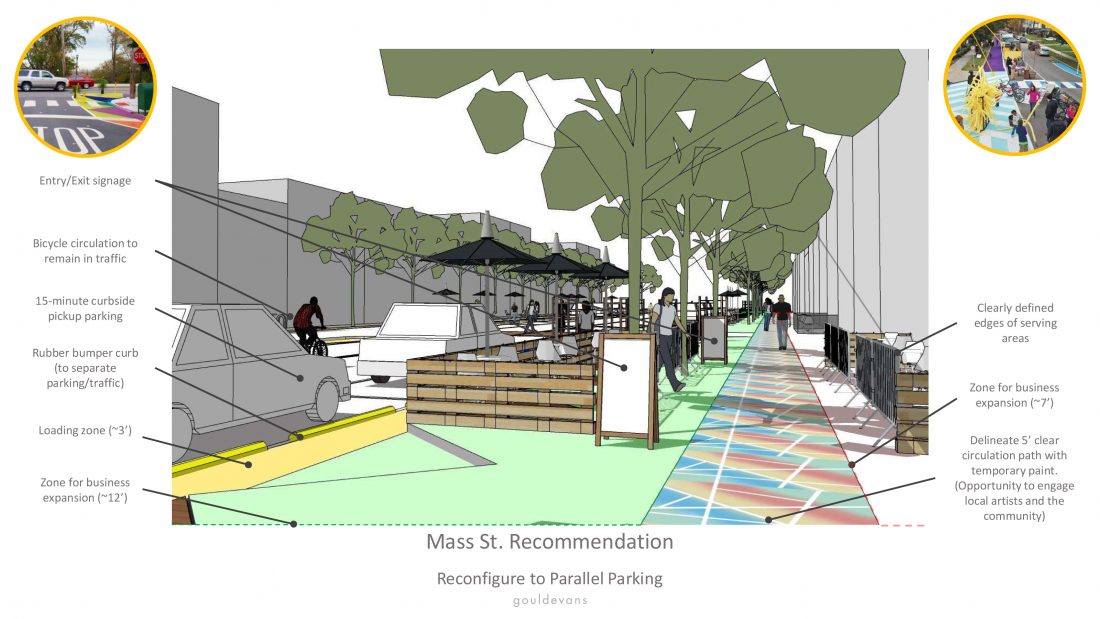 The parking along Massachusetts Street represents about 11% of the parking downtown, with the majority of parking located in surface lots throughout downtown and the three city parking garages. Assistant City Manager Diane Stoddard told the commission that there are currently 346 angled parking spaces along Massachusetts Street, and that at last count the proposed layout would convert those to 107 parallel parking spaces and leave 10 angled spaces that are reserved as accessible parking spots.

Though various businesses have spoken and written to the commission in support of the layout, 18 businesses signed a statement, submitted to the city Tuesday, saying they opposed the changes. The statement says that eliminating angled parking spots and providing only a few short-term parallel parking spaces on Massachusetts Street will decrease the viability of downtown as a whole. The statement goes on to say that customers depend on convenient parking near their businesses and are already being forced to change how they shop and that forcing a new parking inconvenience on them might change where they shop.

Commissioners Larsen and Boley both said they were concerned about the effect that less parking along Massachusetts Street would have on retailers. Larsen also said she was concerned that the vacated angled parking areas would not be used for outdoor commerce by some businesses, such as the vacant Allen Press building, the former Journal-World production building, and the Watkins Museum of History. Larsen proposed that such spaces be left as angled parking and that the layout be changed to add three angled parking spots at the end of each block, on each side of the block, which she said could represent a compromise.

“It still leaves a lot of space, but it would maybe be a compromise that would help some of the retailers out,” Larsen said.

Other commissioners were interested in discussing potential changes to parking, but wanted to approve the resolution so that the plan could move forward. Mayor Jennifer Ananda said that change is difficult, but that now was the time for the city to explore temporary changes to the downtown. However, Ananda said the plan should be nimble and she wanted the ability to consider Larsen’s proposal, but with considerations for vehicle, bike and pedestrian safety. Finkeldei and Shipley also said they were interested in potentially recouping any converted parking spaces that went unused for outdoor commence and discussing tweaks to the layout to increase parking along Massachusetts Street.

In response to questions from the commission, City Engineer David Cronin said that mixing angled and parallel parking along Massachusetts Street could create a safety concern and some confusion for drivers. Ultimately, the commission voted 3-2 to approve the resolution regarding the use of the right-of-way, but with the direction to make modifications to the layout to maximize parking. Commissioners approved the resolution with the understanding that the details of the layout could be further discussed and approved over the next couple of weeks, while the city awaits the delivery of materials to reconfigure the street. The commission also voted to have the layout only in place through Oct. 31 and to review how the new layout is working at its meeting Aug. 4.

Reconfiguring the layout would cost the city about $100,000, about half of which would be for actual materials, such as new parking signs, pavement markings, traffic delineator posts and rubber curbs, according to a city staff memo. The other half would be for the use of city labor, equipment and some contingency funding. It would be up to the individual businesses whether to expand dining or retail in the newly created space, and businesses would also be responsible for outfitting the area with tables or other materials.

Stoddard said that the materials would be delivered in one or two weeks, and that it would take two to three days to put the new layout in place. She estimated it could be in place around July 3.