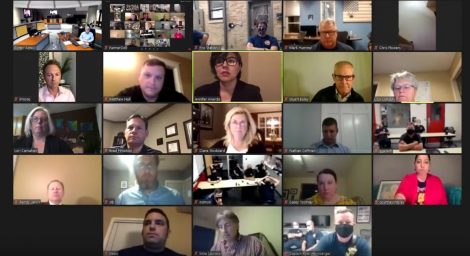 photo by: Screenshot/City of Lawrence

City leaders have made changes to the local resolution governing city employee unions that union organizers say will strengthen the ability for city employees to form bargaining groups.

The changes approved by the commission Tuesday increase the number of potential employee bargaining groups from four to six and amend the voting threshold to unionize from 50% of all employees in a group to 50% of votes cast, as long as more than half of the bargaining group votes, among other changes. Matt Hall, secretary-treasurer and business agent for Teamsters Local 696, told the commission that the discussion of the changes to the resolution had been a good, productive process.

“They are going to serve the city well, and we ask that you guys make a decision and implement (the changes),” Hall said. He said a supermajority of one of the bargaining groups wants to be represented by the Teamsters, though he did not specify which one.

Though the Teamsters initiated the discussion, subsequent changes requested by members of the local firefighters union dominated Tuesday’s discussion. Following the Teamsters’ proposal in December, the International Association of Fire Fighters Local 1596 proposed changes to the resolution that would include more Lawrence-Douglas County Fire and Medical staff in the bargaining group and union contract. Hall said the Teamsters also supported the IAFF’s request.

Specifically, the IAFF proposed that the resolution should allow for its union contract with the city to also cover fire captains, who union representatives say have limited supervisory duties and work alongside other union employees but don’t receive all the same benefits included in the union contract with the city. The city classifies fire captains as supervisors and the resolution excludes supervisory employees from being part of employee unions. City staff said that having fire captains in a bargaining group with staff they supervise would create a conflict of interest.

The commission heard more than an hour of public comment from about 30 fire and medical employees and their supporters. Many of the speakers emphasized that fire captains have limited supervisory duties and take all the same risks as frontline employees but don’t receive the same pay, benefits and protections because they are excluded from the union contract.

Most commissioners said they wanted to stick to the city’s resolution that does not include employees with supervisory roles within unions as long as pay and benefit discrepancies between captains and union employees were addressed. Ananda supported the changes proposed by the Teamsters, but voted against adopting the resolution because she wanted to include the additional provisions requested by the firefighters union. She said if fire captains are doing substantially the same work as non-supervisory fire and medical employees, then she would support a reassessment of the captain position and its designation as a nonsupervisory role eligible to join the union.

Commissioner Stuart Boley, Commissioner Lisa Larsen and Vice Mayor Brad Finkeldei said they thought captains have supervisory roles and should not be included in the union. Ultimately, the commission decided not to make changes to the resolution that would allow captains to unionize, but directed city staff make changes to the city’s 2021 working budget to address pay and benefit disparities between union and nonunion fire and medical employees.

“We have to fix that disparity, that’s the No. 1 point,” Finkeldei said.