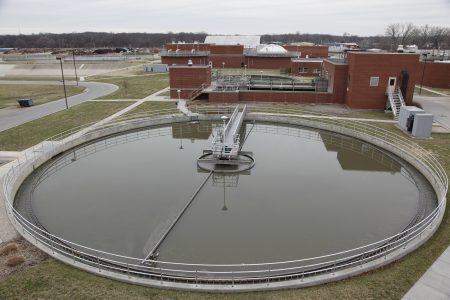 The City of Lawrence Wastewater Treatment Facility at 1400 E. Eighth St., is pictured in this file photo from March 13, 2009.

The budgeting philosophy of Lawrence’s new city manager could soon be put into action, and the first place some residents may notice the change is the growing total on their utility bills.

City Manager Craig Owens is recommending about $90 million in capital and maintenance projects next year that he says will begin addressing infrastructure needs that are long overdue, including multimillion-dollar improvements to the city’s stormwater system and other facilities. Owens’ emphasis on infrastructure investment ties into his goal for the city to strive for the “lowest cost of ownership.” Right now, that looks like the city pursuing various expensive projects that would require increases in city utility rates, but Owens’ view is that this approach preserves the infrastructure longer and will cost the city and its taxpayers less over time.

“The broader story is that we have to address the neglect of infrastructure that we’ve had, and the longer we push that off, the more expensive it is and the more expensive it will be for repairs, taxpayers and the general citizenry,” Owens recently told the Journal-World. “So what we’d rather have is a high level of service that we maintain over time at a lowest cost of ownership.”

Owens and other city staff members presented the recommended Capital Improvement Plan to the Lawrence City Commission at its meeting July 14. The 2021 CIP, which totals about $51.6 million, is part of Owens’ $291 million recommended budget, which calls for a flat property tax rate but increases in all three city utility rates. In addition to the $51.6 million CIP for 2021, the recommended budget calls for a $24.4 million maintenance plan and a $14 million vehicle and equipment replacement plan, or about $90 million total among the three plans. For comparison, the city budgeted $62.8 million for capital improvements in 2020.

Under the recommended budget, all three city utility rates would increase, amounting to an approximately $110 annual increase over this year for the typical residential customer using 4,000 gallons of water monthly. Specifically, the budget calls for an 8% increase for water, a 3% increase for solid waste and a 50% increase for stormwater. The stormwater increase — which because the current fee is relatively low amounts to only $27 more annually — would go toward major stormwater infrastructure projects.

Finance Director Jeremy Willmoth said that the utility rate increases will go largely to support improvements to the city’s stormwater system, which he said has significant issues. For example, the system includes some drainage tunnels that are more than 100 years old and that some residents say don’t have the capacity to handle many storms and result in regular flooding of Old West Lawrence, as the Journal-World has reported.

“This is our attempt to begin to address those (stormwater issues) in a comprehensive way,” Willmoth said. “And so the first thing was the plan, and now that the plan’s been put into place, it’s funding that plan. Without that significant revenue increase, there would be no way to afford the significant projects that have been outlined by the staff.”

Owens said he did not take the utility rate increases lightly, but that his plan for investing in infrastructure aims to address the major infrastructure neglect he observed when he took his position. Owens has described the budget as a placeholder budget because the commission will likely make amendments once it updates its strategic plan. The city recently reopened public input regarding the plan’s spending priorities because of the pandemic and calls for police and racial justice reforms. Apart from the placeholder nature of the budget, Owens said the $239 million, five-year CIP is his budget message.

“That is really, really important in addressing these issues that I saw when I first came to town — and that are really not in dispute by anybody that I’ve met — and have been really pushed off year after year, and can’t be anymore,” Owens said. “So I’m very proud and excited about presenting such a large five-year plan of projects.”

The 2021 recommended budget is the first Owens has created since joining the city last year. The condition of the city’s infrastructure was one of Owens’ key observations in a report he presented the commission after his first 100 days in office.

The five-year CIP totals about $239 million. The three most expensive projects on the five-year plan are all recommended to receive some funding next year, with the remainder of the funding divided among all or some of the future years.

In May, the commission approved a new prioritization method for the city’s Capital Improvement Plan that scores one-time projects and purchases against nine factors or categories. The highest-scored project is a $6.2 million stormwater system identification and assessment program, $2.4 million of which is budgeted for 2021. The program will help the city to create a comprehensive stormwater maintenance plan. Another high-priority project for next year is a $3 million stormwater project to improve drainage at 17th and Alabama streets. The full CIP comprises dozens of projects and is available on the city’s website, lawrenceks.org.

Commissioners expressed general support for the recommended CIP at their most recent meeting, but Commissioner Lisa Larsen said she was interested in further discussing the proposed utility rate increases. That discussion is scheduled to occur later this month. In reference to the recommended $6.2 million stormwater study and related stormwater work, Larsen said she was happy that the city’s stormwater system was going to be looked at holistically.

“I can’t tell you how happy I am with what they’re doing with the program and that they are actually looking at some really good management tools to look at this as more holistic,” Larsen said. “They are going to look at a whole basin versus piecemealing things together.”

Vice Mayor Brad Finkeldei said he thought the CIP was a significant investment in the community and would be important going forward. He said it was especially important given the consequences of broken water mains and homes flooding from stormwater issues and that severe weather related to climate change could exacerbate some infrastructure issues.

“I think we have fallen behind in looking at water, wastewater and stormwater projects, and certainly as we talk about climate change and folks mention more severe events, these are things we have to get on top of now,” Finkeldei said. “So I really appreciate that this Capital Improvement Plan allows us to address significant issues in those areas.”

More detailed information regarding the recommended budget’s utility rate plan will be presented to the commission at its meeting July 28. As part of that meeting, the commission will be asked to set the maximum expenditures for the 2021 budget. The public hearing on the budget will take place on Aug. 11, and the second reading of the budget is scheduled for Aug. 18.