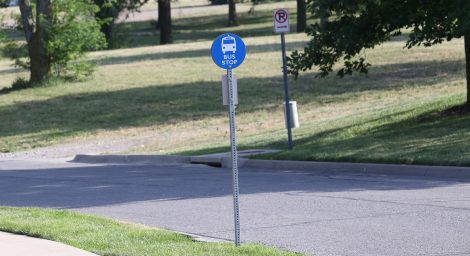 A local church has donated $10,000 to the city to help fund construction of bus benches and shelters throughout the community.

As part of its meeting Jan. 7, the Lawrence City Commission accepted the $10,000 donation from Velocity Church, which has services at the Lawrence Arts Center and Theatre Lawrence. Commissioners expressed gratitude for the donation before voting to accept the gift.

In a letter to the commission, Lead Pastor Justin Jenkins said the gift was made possible by the generosity of the Velocity Church congregation and the belief that partnership with local leaders is essential to make a difference in the city. The letter states that through conversations with the city, the church learned of the city’s plans to add bus benches and shelters to certain high-traffic routes, and the church hoped the donation would help install additional benches and shelters.

Velocity Church Outreach Director Rachel Hartford told the Journal-World that the goal is to enable the city to expand its current plan for installing benches and shelters and better address the need for those amenities in East Lawrence, North Lawrence and other locations in the city.

“Our goal is to be partners with our city and county leaders,” Hartford said. “We realize that we have the opportunity to serve our city and neighbors as they use the public transportation system.”

Currently, only about 16% of Lawrence bus stops have shelters or benches. Specifically, there are 322 bus stops that serve the coordinated city and University of Kansas bus routes, and 39 have shelters and 14 have benches, according to Transportation Planning Manager Jessica Mortinger, who is also serving as interim transit manager.

The city has delayed a widespread installation of shelters and benches for years in anticipation of constructing a bus-transfer hub, which will cause some bus routes to change. In 2015, the Lawrence Journal-World reported that residents in East Lawrence began placing chairs and some handmade benches at bus stops to help address the lack of seating. Makeshift seating has appeared at other bus stops around the city in the years since then.

Funding for the bus-transfer hub was provided by the transit sales tax, but the delay was caused by disagreement, including opposition from neighbors, regarding where the hub would be built. After two location studies and years of debate, the City Commission decided last year to locate the bus-transfer hub on Bob Billings Parkway, between Crestline Drive and Iowa Street. The $4.5 million hub will serve as the primary station and transfer point for the coordinated bus service.

The city has budgeted spending $150,000 on transit shelters and other amenities as part of its 2020 budget. Adding bus benches and shelters requires pouring a concrete pad for their installation, and Mortinger said that until the bus-transfer hub is constructed and routes are updated, the city will begin by adding amenities in locations where it know routes will continue to pass in the future.

The donation will also contribute to some additional conversation at City Hall. At the commission’s meeting, Commissioner Courtney Shipley asked if the city had a policy for donations, and city staff responded that it did not. Shipley and other commissioners agreed that establishing a policy should be discussed at a future meeting.