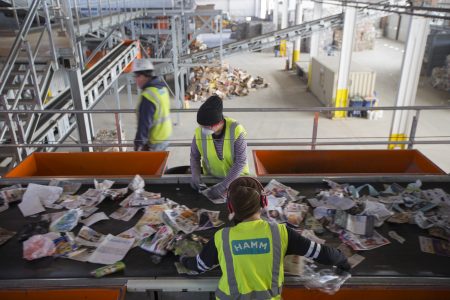 Workers sort through recycling materials on a conveyor belt as they are sent through a complex sorting machine on Wednesday, Feb. 17, 2016 at the Hamm's Recycling Facility, 26195 Linwood Road.

If the market for recycled materials remains low, the city’s costs for processing recyclables could go up — and so could residents’ utility bills.

The City of Lawrence contracts with the Hamm recycling facility to process recyclable materials, but changes in global markets have led to a significant decline in the value of those materials over the past couple of years.

The city already has been feeling the effect of those changes — it’s received tens of thousands of dollars less in rebates from Hamm’s sale of the materials it processes. But the city will need to negotiate a new contract with Hamm soon, and there could be even more of an impact if Hamm decides it needs to charge more to make up for the sluggish market. The current contract expires next year.

Hamm director Charlie Sedlock said the city and Hamm would have to reconsider its rates if markets remain low into next year, but he noted there is potential that the U.S. market could improve before that.

“I would think that both parties would have to sit down and look at the state of the market and the state of recycling,” Sedlock said. “We think recycling is very important to the city and others around, but at the same time the markets have changed, and so we’d have to look at that at that time.”

The city initiated its residential single-stream recycling program in 2014. In a single-stream program, residents can put several kinds of recyclables, including glass, paper and plastics, in the same container for collection. Costs for the single-stream service are included in all residential utility bills.

The city also provides what’s known as a source-separated recycling program for small to medium-sized businesses and schools. Unlike the single-stream program, the source-separated program only collects cardboard and office paper, and it’s provided to those businesses free of charge, according to the city’s website.

The city’s trash and recycling operations are what’s known as an enterprise fund, meaning that the fees the city charges residents are set up to cover the costs. That means that if Hamm were to charge more in a new contract, residents would have to pay higher fees to make up the difference.

While the City of Lawrence’s recycling program hasn’t found itself in the dire situation of some cities, the global decline in the recycling market has had an impact. As the Journal-World previously reported in 2018, Hamm had to find U.S. buyers for a portion of the recyclables that it previously sold to China. Since then, Sedlock said that though a buildup of single-stream materials occasionally occurs, Hamm has still been able to recycle all the material.

“Every now and then we do very short-term storage for a few weeks, but that’s very normal in the recycling business,” Sedlock said, adding that because of the quality and purity of Lawrence’s recyclables, “we are able to move recycling quite well.”

However, the facility, and by extension the city, is no longer getting paid for its single-stream materials, according to data City of Lawrence Solid Waste Manager Kathy Richardson provided the Journal-World.

In 2016, the city received about $20,000 in rebates for its single-stream recycling and about $160,000 from its separated commercial recycling, which covered about 60% of the cost of Hamm’s services, according to the data. Now, the city gets no rebates at all from its single-stream recycling, and rebates from separated commercial recycling have fallen by more than half.

In the first 11 months of 2019 — December numbers are not yet available — the numbers tell a markedly different story. The total amount of processing fees was about $300,000, but the city received no rebates for its single-stream material and only about $68,000 in rebates for its source-separated material. In short, the rebates covered less than 25% of the processing fees for the collection of the material.

“There are no good markets for these plastics because no one is paying for plastics #3-7 currently,” Richardson said.

The effect on recycling bills

So far, the low recycling market has not drastically affected what Lawrence residents pay for single-stream recycling service, but that could change.

Beginning in January, the amount residents pay for trash, recycling and yard waste collection increased by 3%. Specifically, solid waste rates increased from $18.80 per month to $19.36 per month, or by $6.72 annually. One of several factors noted for that increase was that “revenues for recycling material rebates are relatively low due to depression in the international commodity markets,” according to a staff memo to the City Commission.

The city’s contract with Hamm will expire in 2021, meaning that sometime before that, the city and Hamm will have to sit down and determine whether Hamm’s fees for the processing services will need to increase.

The Journal-World asked Richardson what the low market for recyclables will mean for the city’s contract with Hamm — specifically, whether it’s possible that Hamm’s rates, and therefore the rate that residents pay, might not increase. Richardson said the recycling markets could potentially see some improvement as recycling processing facilities in the U.S. come online, and that the city will continue to monitor the markets.

Richardson said that since China announced its recycled materials ban, there has been a movement to build additional infrastructure for recycling mills in the U.S. She said mills typically take two to three years to build, but that as recycling options in the U.S. increase, there will be less reliance on foreign markets.

What is to the city’s advantage when it comes to selling its single-stream material is that the city has had a consistently low contamination rate, or the percentage of nonrecyclable material or trash that residents put in their recycling bins. Since the inception of the single-stream recycling program, the contamination rate has ranged from 4.6% to 6.6%, according to city data provided to the Journal-World. The 2019 audit indicates a contamination rate of about 5.13%, but Richardson said the audit results must still be finalized by Hamm.

Sedlock said that the quality of the material being collected has helped the city’s recycling program remain successful, especially compared to the circumstances that some cities are facing.

When asked whether Hamm’s rates could increase if global markets remain low and the U.S. recycling market doesn’t develop more, Sedlock didn’t specifically say whether it was a possibility.

“It would very much be on the table for us to talk about ways to keep the recycling story and the version that’s going on in Lawrence right now — which has been extremely successful — moving forward and without missing a beat,” Sedlock said.