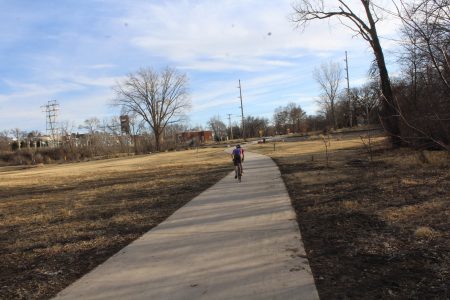 A bicyclist rides on the Riverfront Park section of the Lawrence Loop on Saturday, Feb. 29, 2020.

Lawrence and Baldwin City will each receive more than a million dollars in state grant funding for bicycle and pedestrian trail projects, the Kansas Department of Transportation announced Friday.

Lawrence will receive a $1.07 million grant to help close one of the gaps in the Lawrence Loop trail network. The grant will help pay for a concrete path from the intersection of Peterson Road and North Iowa Street to Michigan Street. Lawrence also received a separate $400,000 grant to build new sidewalks and safety crossings near schools.

Baldwin City, meanwhile, was awarded a $1.012 million grant to help fund a 10-foot-wide concrete hiking and biking trail that will run alongside the Midland Railway route from U.S. Highway 56 to High Street.

In total, the two Douglas County cities account for more than $2.4 million of the $8.6 million in Transportation Alternatives grants that KDOT announced Friday. KDOT Secretary Julie Lorenz said in a press release that the program received more than 30 applications from around the state and awarded funding for 18 of those projects.

The KDOT grants will provide 80% of the construction costs for the projects, and the cities will be responsible for the remaining 20%. The cities are also responsible for design costs, relocating utilities and acquiring the necessary right-of-way.

Last year, Lawrence received a $480,000 KDOT grant to help complete two sections in the Lawrence Loop. One portion runs from Eighth Street to 11th Street, and the other follows 29th Street from the Burroughs Creek Trail to Haskell Avenue. Work on those sections is expected to be completed this year.

Ed Courton, Baldwin City’s community development director, said the project that was funded this year will link up with another project that got a $580,000 KDOT grant a year ago — a 6-foot-wide multi-use trail on the south side of Elm Street from Eighth Street to the Midland tracks. The city made the two separate grant applications for the related projects because there would not have been enough KDOT grant money available in a single year, he said.

Like the other projects that were awarded grants on Friday, the Midland Railway trail is slated for construction in 2021, Courton said. It will be a complex project that might not be finished until spring 2022. The project will involve raising the level of the new trail to the same elevation as the Midland tracks, placing culverts and addressing drainage issues along the route, he said.

The new concrete pathway will provide a safe route to the Baldwin school district’s east campus and a recreational amenity for residents, Baldwin City Mayor Casey Simoneau said. He said it will also be the first leg of a proposed trail that would run along the Midland Railway route between Baldwin City and Ottawa.

“This is a great project,” he said. “I think the people of Baldwin City are really going to love it when it’s completed.”