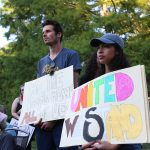 Activists hold signs at a rally calling on local leaders to make Lawrence a sanctuary city on Friday, July 12, 2019, at Watson Park.

The topic is in front of the commission following a proposal last year from a local group, the Sanctuary Alliance, which would like Lawrence to become a sanctuary city. More specifically, the alliance has proposed that police do not enforce requests from federal immigration agents unless they are related to a criminal matter and that the city codify practices preventing people from being discriminated against because of their immigration status.

The proposal came on the heels of a local incident involving U.S. Immigration and Customs Enforcement and a subsequent rally where hundreds called on local leaders to make Lawrence a sanctuary city. On June 27, an ICE agent requested local backup when he saw a person walking down the street whom he believed had a warrant, according to a statement Police Chief Gregory Burns Jr. issued at the time. A Lawrence police officer responded to the scene to support the ICE agent, but the person did not actually have a warrant and no arrest was made.

Commissioner Lisa Larsen subsequently requested a study session to discuss the Sanctuary Alliance’s proposal. Larsen, who was then mayor, said at the time that while police have a general practice, she thought a written policy regarding how police handle such situations would be more transparent for residents and allow the policy to be publicly debated.

The Lawrence police department has now drafted the policy. In a letter regarding the draft policy, Burns said the police department, city staff and representatives of the Sanctuary Alliance have met to collaborate on the policy. Burns said the policy began by drafting local practices already in place as well as incorporating best practices from police agencies across the country and the professional organization Lexipol, which provides policy recommendations based on state, federal and case law.

“Department representatives engaged in a thoughtful review of the policy recommendations provided by the Sanctuary Alliance and incorporated many of its recommended changes,” Burns wrote. “The resulting department policy seeks to balance the protections of our community members with the responsibilities of the agency.”

When it comes to interactions with residents, the policy states in part that police shall not stop, question, arrest or detain anyone based solely upon actual or suspected citizenship or immigration status. Other provisions in the draft policy are as follows, and the full draft policy is available on the city’s website.

• The policy notes that ICE may issue civil detainer requests or administrative warrants for people believed to be in violation of U.S. immigration laws. However, the policy indicates that police cannot act on noncriminal detainers and warrants alone. The policy states that police shall only detain, arrest or transport an individual if the person is wanted on a criminal warrant issued by a court or there is underlying probable cause for criminal charges.

• Unless otherwise required by law, police shall not engage in, assist or support immigration enforcement except as follows: in response to an articulated, direct threat to life or public safety; to safely execute a criminal warrant or court order issued by a local, state, or federal judge; to assist an officer in an emergency; for the purposes of traffic control for the benefit of the traveling public only.

• Police do not generally need to notify ICE when booking arrestees at the jail. However, under certain circumstances, such as some felony investigations, contact with ICE could be feasible. The officer should, in consultation with a supervisor, consider the totality of circumstances of each case, including but not limited to the seriousness of the offense and community safety. The policy states that according to state law, “inherently dangerous felonies” include murder, kidnapping, robbery, rape, aggravated assault, aggravated arson, aggravated burglary, aggravated battery and abuse of a child.

• Victims and witnesses of crime should not be the focus of immigration inquiries and should be encouraged to cooperate in the reporting and investigation of crime. All people residing in the U.S., documented or undocumented, are protected under the rights outlined in the U.S. Constitution, including the Fourth Amendment right against unnecessary search and seizure.

In November, the previous commission discussed a draft city ordinance regarding how city departments interact with undocumented immigrants, and expressed general support for the ordinance. As part of its meeting Tuesday, the commission will also discuss that ordinance, which includes provisions against considering immigration status or collecting immigration-related information when providing city services, among other provisions. The full draft ordinance is available on the city’s website.