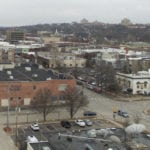 The former Borders building located at the southeast corner of Seventh and New Hampshire streets is pictured Wednesday, Feb. 28, 2018.

The next phase of Lawrence’s Downtown Master Plan process will soon begin, and the city wants to know how residents think downtown should look and function in the years to come.

The new master plan will cover downtown land use and development for the next 15 to 20 years. Planning and Development Director Scott McCullough said the visioning phase of the plan’s development will look at multiple aspects of downtown and how they could improve.

“It’s really looking at the opportunities for development and public spaces and traffic and infrastructure, and laying out a shared vision for what downtown could become if those elements were enhanced or changed in some way,” McCullough said.

Public feedback about the downtown area will be gathered at an upcoming workshop and through an online survey. The master plan has not been updated in 20 years, and the new plan will address issues such as building heights, parking, transportation, infrastructure, beautification and streetscapes.

Regarding changes for downtown that the plan could address, McCullough said city-owned parking lots present one potential redevelopment opportunity.

The city has 17 surface parking lots of various sizes downtown, according to parking maps. McCullough said that there are several large lots that could be redeveloped with any number of new uses, including the creation of public open space or the construction of mixed-use buildings. He said new buildings could provide underground parking, as well.

“I think if we get to talking about redeveloping a city parking lot, public parking would have to be part of the development itself to do no harm to public parking,” McCullough said. “That could entail going down with parking and then up with development.”

McCullough said other changes might involve the downtown area’s interactions with the adjoining neighborhoods or with the Kansas River. Earlier this year, the City Commission approved a riverbank stabilization project that might also create public access points, a terraced plaza and whitewater features on the Kaw.

The process to define the vision, goals and objectives of the plan will begin with a workshop, which will be open to the public, according to a city announcement. The workshop will take place from 6 to 8 p.m. Oct. 16 at Flory Meeting Hall on the Douglas County Fairgrounds, 2120 Harper St.

Residents can also complete a visual preference survey in which they can weigh in on the future appearance of the downtown area. McCullough said that survey covers elements such as building design, streetscapes and landscaping. The survey will be available on the master plan website starting Oct. 2.

Consultants will create a draft of the plan, which will be presented to the community before being considered by the City Commission. The city aims to have the master plan completed and adopted in the spring of 2020.