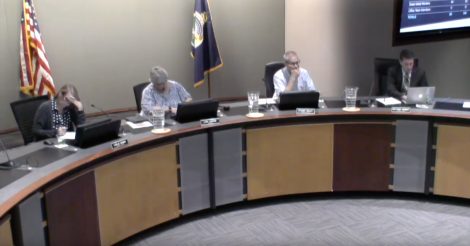 City leaders have approved an incentive package for a manufacturing plant that wants to bring 80 jobs to Lawrence.

U.S. Engineering Metalworks plans to build a 100,000-square-foot manufacturing facility on an approximately 25-acre site at Lawrence VenturePark, the business park on the eastern edge of Lawrence. The company will be the first to locate a business in the park, which opened in 2014.

Commissioner Stuart Boley said he was pleased the company had decided to locate in Lawrence.

“I think it’s excellent for the community, and we appreciate you coming in,” Boley told representatives of the company. “This is a big step forward for VenturePark, so thank you.”

U.S. Engineering Metalworks applied for incentives under the city’s Catalyst Program, which provides a fast-track application process for industrial projects that want to build or expand facilities in VenturePark, East Hills Business Park or other industrially zoned land.

There are no wage requirements for the jobs with the Catalyst Program, and no wage figures were listed on the publicly available application. However, a company representative shared that information with the commission Tuesday.

Brendan Rittel, CFO and general counsel for U.S. Engineering Company Holdings, said the average wage at the Lawrence plant would be $72,800, plus other benefits. He said the company expects to open the plant at the very end of 2020 or the beginning of 2021.

Regarding the 80 positions, Rittel said the company expects to employ 15 pipefitters, 10 plumbers, 44 sheet metal workers and 11 office workers. He said all but the office positions will be union jobs.

Mayor Lisa Larsen said she was glad to see the program succeed in bringing a company to the business park.

“It’s nice to start to see some results from all that hard work that we’ve done in the past few years to get this program going and just watch it actually work,” Larsen said.

Commissioners Leslie Soden and Matthew Herbert agreed. Herbert said he thought the project speaks specifically to what the Catalyst Program aims to do by adding more skilled jobs in the community.

In its incentive application, U.S. Engineering Metalworks said it anticipated about 80 people would work at the Lawrence site at first, and that it expected that number to grow to about 140 within five years.

The tax abatement will be for a 10-year period and could range from 50% to 70%, depending on whether the facility is built to certain environmental standards. The company requested industrial revenue bonds, which will allow it to obtain a sales tax exemption on materials for the $15 million project. The company also requested that the 25-acre site be provided for free, which is another element of the Catalyst Program.

The estimated land value for the parcel is $669,070, according to a city staff memo to the commission. As part of the agreement, the company will take over payments for VenturePark special assessments on the parcel, estimated at $484,282. The company will also be responsible for its portion of special assessments related with a new benefit district that will be established to bring water and sewer services to the site and build a cul-de-sac.