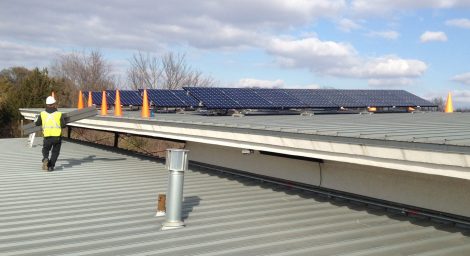 Solar panels are installed by Good Energy Solution at the City of Lawrence's Prairie Park Nature Center in this photo from November 2014.

The City of Lawrence is preparing to update its climate protection plan, and the mayor wants the city to aim high when it comes to renewable energy.

The city allocated $75,000 as part of its 2020 budget to update its climate protection plan, and the process is expected to get underway early next year. The city’s Sustainability Advisory Board has recommended some environmental goals for the city, including that the city adopt a policy as soon as possible to achieve 100% use of renewable energy in all city functions by 2025.

Mayor Lisa Larsen, who is a retired environmental geologist, said she supported that recommendation and thought alternative energy sources should be a key component of the new climate protection plan. Larsen said that as part of the development of the plan she wanted to research whether the Sustainability Advisory Board’s renewable energy goal was feasible and how the city could accomplish it.

“I am definitely in support of going to 100% renewables, but we need to make sure that we have a plan and that we can actually accomplish that and not make it just an empty goal,” Larsen said. She also noted that the city only directly controls the energy source for buildings it owns, and she urged residents to opt for renewable energy sources through their utility provider.

Across the U.S., more than 100 cities and counties have adopted 100% clean energy goals, according to a list maintained by the Sierra Club. Six cities have already hit their targets.

Larsen also said she wanted to make sure the city monitored how its growth affected the environment. As outlined in the new comprehensive plan, Plan 2040, Larsen said the city needed to consider the environmental, economic and social impacts of all development projects.

“It’s kind of a three-tiered system where we need to find some balance of those three items,” Larsen said. “… As we grow, infill as well as expanding our borders, we need to make sure that we gauge those based on the sustainability model.”

The city’s current climate plan was created in 2009. It covers a 10-year period and includes greenhouse gas emission standards, energy conservation and other environmental goals. The Sustainability Advisory Board recommends that the new plan focus on actionable steps that can be taken during the next 10 years to continue to reduce greenhouse gas emissions and to meet or exceed goals established in the previous plan.

One of the city’s larger initiatives in recent years was approximately $12 million in energy-efficient upgrades to city buildings, which the City Commission approved in 2017. Those upgrades — including LED lighting in 40 city buildings, a solar array on Fire Station No. 5 and new heating and cooling systems at multiple city facilities — are expected to cover their costs within about 20 years. The contract for the upgrades includes a savings guarantee, and the energy performance report for the first year was provided to the commission at its most recent meeting.

The report indicates that the city slightly exceeded the annual savings guarantee in the contract, saving about $550,000. About 75% of those savings come from electric and fuel savings and the rest in maintenance savings. Larsen said that overall the performance was really good, though there are some areas to watch. The report breaks down the city’s energy costs by building, and Larsen noted there are a couple of buildings that didn’t quite meet their performance goals and staff would be looking into those cases to determine the causes.

Once the new climate protection plan is adopted, the board also recommends that the plan be integrated at the department level in all capital improvement considerations and in the daily operations of all city functions. The plan should be comprehensively reviewed every year.

“Given the dynamic nature of climate change and the existential threat it poses to society, the Plan should be reviewed in full by the Sustainability Advisory Board (SAB) annually and a full report should be provided to the City Commission,” the recommendation states.