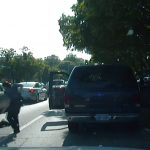 The City of Lawrence has moved an excessive-force case involving its police department to federal court and requested that the case go to trial.

Last month, a motorist who was shot by police after a traffic stop turned violent filed a lawsuit in Douglas County District Court claiming that police used excessive force against him and that the city failed to properly train its officers. On Wednesday, attorneys representing the city moved the case to the United States District Court of Kansas City, Kan., and requested a trial by jury.

The notice of removal to federal court states that the action was taken because the case is based on federal civil rights law and therefore the U.S. District Court has jurisdiction. The federal case file indicates the lawsuit falls under the Civil Rights Act and the case has been assigned to U.S. District Judge Kathryn Vratil.

University of Kansas Law Professor Lumen Mulligan, who teaches civil procedure, said such a removal was common practice and that it was the city’s right so long as that removal was done appropriately. Mulligan said the case would now be heard in federal court absent a valid objection that might be raised by the plaintiff to that removal.

The city has hired attorneys Jacob Bielenberg, Sean Sturdivan and Elizabeth Evers Guerra of the firm Sanders Warren Russell & Scheer LLP to represent it in the case. Along with the removal, attorneys representing the city also requested an extension until Nov. 1 to file the city’s response to the lawsuit.

The firm is representing the city, the Lawrence police department, the police chief and one of the officers involved in the stop, Officer Ian McCann, who was not the officer who shot the motorist.

“We intend to move forward with a vigorous defense of the claims and see where it goes,” Sturdivan said.

Akira S. Lewis filed the lawsuit against the City of Lawrence, the Lawrence Police Department, the police chief and the two officers involved in the traffic stop. The lawsuit alleges that the officer who shot Lewis used excessive force and that both officers involved in the stop battered him and inflicted emotional distress through negligence. The police department conducts its own training academy for officers, and the lawsuit also alleges that the city, police department and Police Chief Gregory Burns Jr. failed to properly train and supervise officers.

The incident occurred on May 29, 2018, in the 100 block of West Sixth Street, at the north end of downtown, after McCann pulled Lewis over for a seat belt violation as part of a seat belt enforcement campaign. In police dashcam video, Lewis, who is black, contends he was racially profiled, refuses to provide McCann his license and registration and demands that a supervisor be called. McCann discusses the situation with Lewis and when Lewis does not comply McCann attempts to physically remove him from the car; Lewis subsequently strikes and body slams McCann. Another officer, Brindley Blood, shoots Lewis within seconds after the physical altercation begins. Blood told investigators later that she meant to use her Taser, not her gun.

According to the lawsuit, Lewis was taken to Stormont Vail Hospital in Topeka and the bullet had to be surgically removed and required a small bowel resection, or the removal of part of Lewis’ small intestine. The lawsuit states that Lewis has incurred past and future medical damages, past and future lost wages and has suffered and continues to suffer from emotional distress relative to being shot by Blood.

The lawsuit states that Lewis has incurred damages in excess of $100,000 and requests that those damages be provided to Lewis along with interest, legal costs and other relief the court may deem just and equitable. The lawsuit requests a trial by jury on all claims.

Although Blood is named as a defendant in the lawsuit, the removal notice was made only on behalf of the city, police department, Burns and McCann. Sturdivan said he does not represent Blood and doesn’t know if she’s been served with the lawsuit or the status of her involvement in the case. The federal case file does not indicate an attorney for Blood.

Lewis was also charged in relation to the incident. In August, he pleaded no contest in Douglas County District Court to battery against a law enforcement officer. Lewis was sentenced to 12 months of probation, required to take anger management classes and must pay court costs and other fees, among other conditions.