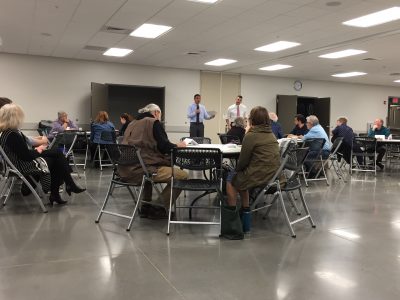 The next phase of the development of Lawrence’s Downtown Master Plan began Wednesday evening with a workshop at the Douglas County Fairgrounds, where residents were asked how downtown should look and function in the years to come. The new master plan will cover downtown land use and development for the next 15 to 20 years, including issues such as building heights, parking, transportation, infrastructure, beautification and streetscapes.

The city hired planning firm Houseal Lavigne Associates last August to help complete the master plan. As part of Wednesday’s meeting, Houseal Lavigne principal Nik Davis provided maps of the downtown and asked the roughly 30 workshop attendees to draw out what they wanted to see and where.

“Be thinking about what it could be,” Davis said. “This is your opportunity to be bold.”

Davis split the attendees into groups and asked each group to identify one big idea for downtown. Many of the groups agreed that the city-owned surface parking lots — there are 17 total in the downtown area — should be redeveloped. They said the lots could provide space for mixed-use buildings that could include housing, office space, parking and other uses.

One group proposed adding more senior housing, and suggested several locations for it: the upper levels of new mixed-used buildings, the old Riverfront Outlet Mall, or the lot at the corner of 11th and Massachusetts streets. Another group suggested building row houses facing South Park, on a space where there is currently a city parking lot.

Two groups proposed something similar to the High Line in New York City, an elevated linear park created on a former railroad track. One group said the project could be created by closing one lane of traffic on the Kansas River bridge — the closed lane could then be repurposed as green space and a place to display public art. Another group also wanted additional green spaces, but suggested they be on top of parking garages downtown and at the corners of intersections where city planters are currently located.

Another group wanted to strengthen downtown’s connection to the Kaw. The group suggested adding more businesses along the river and building a riverside art walk with sculptures.

Each group provided additional ideas beyond its big idea. Multiple groups said a grocery store should locate downtown and that downtown alleyways should be better maintained, thereby providing places for art or other aesthetic enhancements. Some of the other ideas included rentable co-working spaces for entrepreneurs; a multipurpose event space that could provide a venue for the Lawrence Farmers’ Market, art markets, concerts and other events; a trolley between downtown and the Warehouse Arts District; and improved signage and entry features at the north and south entrances to downtown.

Davis also provided the groups with six suggested topics to mark on the maps, but told them they could go beyond those topics. The suggested topics were: assets that are most important for the plan to preserve; development and redevelopment opportunities; roadway improvements; pedestrian improvements; urban design and streetscape improvements; and enhancements and additions to downtown parks, plazas and gathering spaces. He said residents could also provide input by filling out a virtual map on the master plan website, www.hlplanning.com/portals/lawrence. 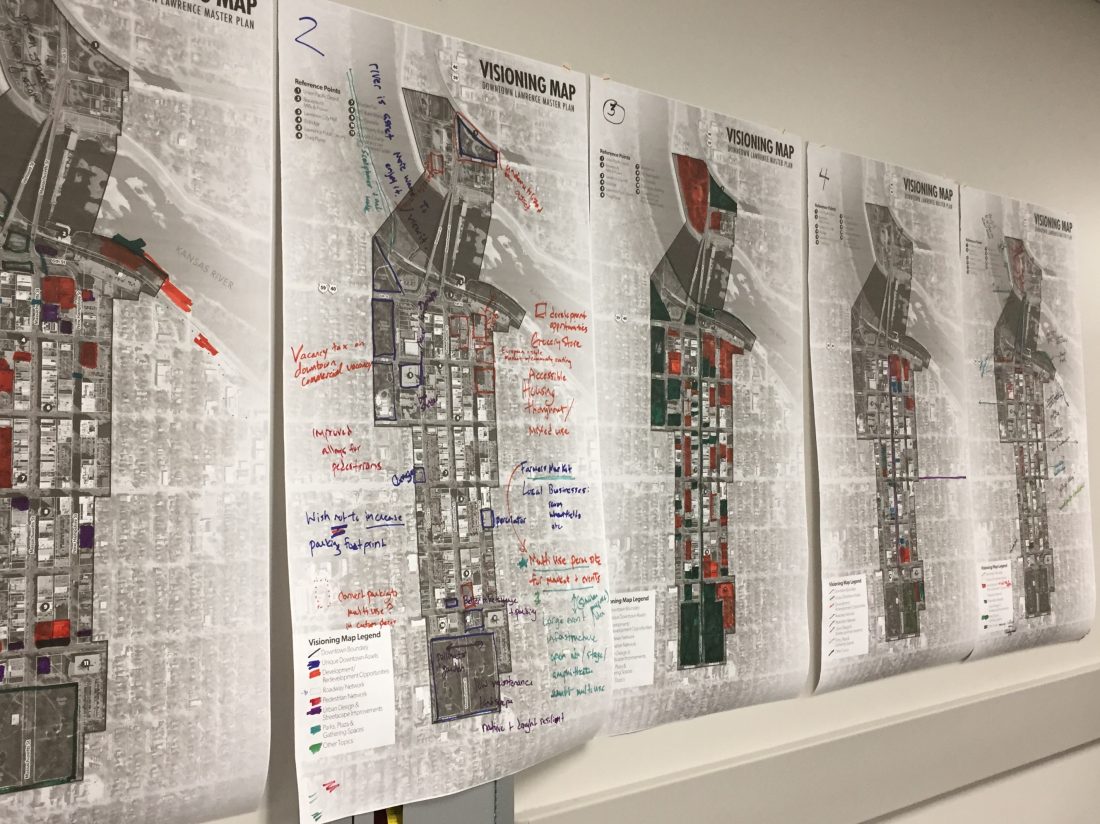 The consultants are also collecting online feedback regarding the aesthetics of downtown building design, streetscapes and landscaping during this phase of the planning process. Davis said residents can complete a visual preference survey online in which they rate various photo examples.

Consultants with the firm have previously conducted workshops to collect feedback regarding major issues facing downtown. Key issues identified by residents in those workshops included affordable commercial rents, affordable housing and historic preservation. Other steps in the development of the plan include an economic and demographic analysis and an assessment of existing conditions.

Consultants will next create a draft of the plan, which will be presented to the community before being considered by the City Commission. The city aims to have the master plan completed and adopted in the spring of 2020.