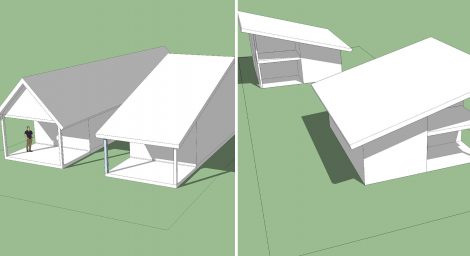 photo by: Courtesy of Tenants to Homeowners

City leaders have approved a measure that will allow two homes to be built on the same lot as long as both homes are affordable.

City leaders have approved a proposal that allows two houses to be built on one lot as long as both homes are affordable.

As part of its meeting Tuesday, the Lawrence City Commission voted unanimously to approve a text amendment to the city’s land development code that codifies the so-called density bonus. In response to concerns that the Brook Creek Neighborhood brought to the Lawrence-Douglas County Metropolitan Planning Commission in August, the amendment states that only lots of a certain size can be divided for such purposes and a permit will be required for the smallest lots.

However, at Tuesday’s meeting, the neighborhood said those restrictions still did not go far enough to discourage the concentration of affordable housing on the east side of Lawrence where lots are cheaper, and a neighborhood leader asked commissioners to consider a more restrictive version of the amendment.

“Lots are much more expensive in west Lawrence — that’s just a fact,” Larsen said. “And in some way we’ve got to reduce those prices, and I think this is the best tool I’ve seen yet to do that.”

The density bonus is the city’s first land use rule to be directly connected to the affordability of homes. The nonprofit organization Tenants to Homeowners, which thus far has built almost all of its projects in eastern Lawrence, originally proposed the density bonus.

The amendment that the City Commission approved was the version recommended by the Planning Commission. It allows two affordable homes on one lot as long as each house’s lot is at least 3,000 square feet — which means that lots smaller than 6,000 square feet can’t be divided. In addition, those wishing to divide lots in the city’s RS5 zoning district — made up of lots of at least 5,000 square feet and common in older neighborhoods such as Brook Creek — will have to acquire a special-use permit. The density bonus is allowed by right on lots that are at least 7,000 square feet, or in the RS7, RS10 and RS20 zoning districts.

City staff had originally recommended a more restrictive proposal that only allowed the density bonus in the RS7, RS10, and RS20 zoning districts and always required a special-use permit. That proposal was the one that Brook Creek Neighborhood Association President Jesse Brinson urged the City Commission to adopt.

Commissioner Matthew Herbert emphasized that houses built using the density bonus would still have to follow all other city code requirements, including maximum building heights, off-street parking requirements and requirements regarding how much open space each lot must have.

Commissioner Leslie Soden said she would be supportive of not allowing the density bonus in the RS5 district and also requiring a special-use permit for the RS7 district, but other commissioners did not agree, and Soden ultimately voted in favor of the proposal as written. And Commissioner Stuart Boley said the city needed tools like the density bonus for sustainability reasons and to support the efforts of those trying to bring affordable housing to the community.