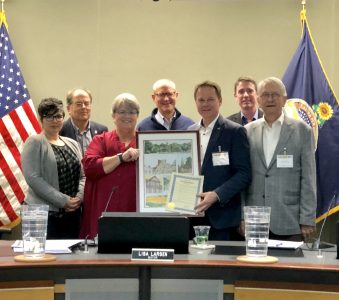 The world seems a little smaller thanks to a now 30-year relationship between Lawrence and its German sister city.

The program has sent hundreds of students to live with host families in both countries, has facilitated regular visits from delegates, and has even led to at least three marriages, according to Sister Cities Lawrence Chair Bill Keel, who is also a University of Kansas German professor. But Keel, who has been involved with the related Friends of Eutin program since its beginning, said the biggest benefit was the perspective it brought to the individual participants.

“(The participant) goes over and spends time in the partner city and gets to know people, gets some new perspectives on what it means to be a German, an American, in a multicultural environment,” Keel said. “It just opens up a whole new chapter in a person’s life, really.”

To celebrate the 30-year anniversary, a delegation from Lawrence, including Mayor Lisa Larsen and Vice Mayor Jennifer Ananda, visited Eutin over the summer, and this week a delegation from Eutin visited Lawrence. The 12-member delegation stayed with host families, visited sites around Lawrence and the state, and received proclamations at Lawrence City Hall and the Kansas Statehouse.

Keel said that he thought the more we got to know people in other countries, the less likely we were to have hostilities with those countries. He said that element spoke to the foundation of the program.

President Dwight D. Eisenhower helped spur the concept of sister cities as part of a larger effort to combat East-West tensions and promote better understanding between nations after World War II, according to the city’s website. Though the relationship and student exchanges began years beforehand, Lawrence officially became the sister city of Eutin in 1989, and later became the sister city of Hiratsuka, Japan, and Iniades, Greece.

Eutin delegate Torben Mothes was in Lawrence this week for the third time to celebrate the anniversary. Mothes said that staying with host families on his visits to Lawrence had given him a view of the culture here and a chance to see how other people live. And for him, that has led to some lasting friendships.

“That is a big benefit, to be in touch with the people,” Mothes said. “It’s like a family. It’s not only to be here like a tourist.”

While the Eutin delegation was in Lawrence they also had a chance to see what the City of Lawrence and surrounding area have to offer. Keel said the delegation visited the KU campus, had a tour of Waxman Candles in downtown Lawrence, had lunch at Free State Brewing Company, visited the Flint Hills Discovery Center in Manhattan, and had an all-day excursion to the Eisenhower Presidential Library and Museum in Abilene, among other activities.

Sister Cities Lawrence Vice Chair Kelly Scholz said the delegation included the Eutin mayor, a member of the city council, an artist and others. Scholz said the long-standing relationship and the exchanges between students have been important for the community.

“It’s a great program and something that the city should be proud of,” Scholz said.

Sister Cities Lawrence is an independent nonprofit board that coordinates all Sister City activities and programs, according to the city’s website. The board, which was previously a city advisory board, includes a seat for the Lawrence mayor. Those interested in learning more about the program or the student exchanges can visit the Sisters Cities Lawrence website.