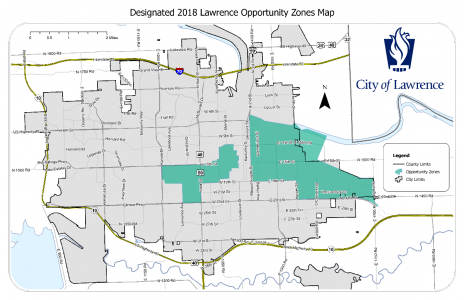 This City of Lawrence map depicts areas that have been designated as opportunity zones.

The public will soon be able to provide input on what developments they would like to see in low-income areas of the city that have been designated as federal opportunity zones.

There are two Lawrence census tracts designated as opportunity zones, and developments within their limits are eligible for tax incentives under a provision in the Tax Cuts and Jobs Act of 2017. One of the opportunity zones encompasses all or part of three eastern Lawrence neighborhoods, and neighborhood groups have pressed for more local discussion and input regarding the program.

The city announced it would hold a meeting Oct. 22 where community members can share what types of development they would like to see in the opportunity zones, according to a city news release.

Lawrence Association of Neighborhood Chair Courtney Shipley said a lot of things could be done with opportunity zones that could benefit neighborhoods, such as affordable housing, and LAN wanted to have as much influence as possible. For instance, she said some projects, such as student housing or hotels, have been overbuilt.

“As far as those neighborhoods are concerned, the question is would they use opportunity zone money to put in something we actually need and want in our community,” Shipley said.

The city states in the release that the ultimate goal of the opportunity zones program is to spur meaningful economic development in the zones. Input shared at the meeting will be provided to the Lawrence City Commission and will be included in an informational guide that will be available for prospective investors.

The upcoming meeting will be hosted by the City of Lawrence, Douglas County Community Foundation, Lawrence Association of Neighborhoods, Lawrence chamber of commerce and KU, according to the release. The meeting will include stakeholder engagement sessions for residents, business owners and other interested parties to give their input on desired developments in the two opportunity zones.

The state of Kansas designated 74 opportunity zones in 2018, and the City of Lawrence provided input on which census tracts it would like considered. City staff submitted four census tracts total for consideration, with the top priority being the eastern Lawrence tract, as the Journal-World reported at the time. To be eligible for submission, census tracts had to meet certain population thresholds and have a poverty rate of at least 20%, according to the Kansas Department of Commerce.

The stakeholder engagement meeting will be from 6:30 to 8:30 p.m. Oct. 22 in Flory Hall at the Douglas County Fairgrounds, 2120 Harper St. Additional information about opportunity zones is available on the city’s website, lawrenceks.org/ed/opportunity-zones.