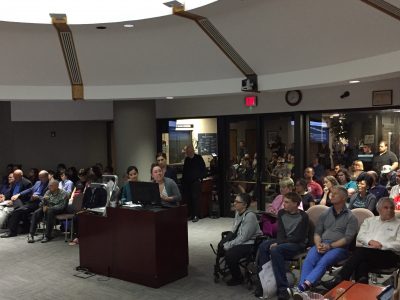 Mariel Ferreiro, a Sanctuary Alliance organizer, speaks to the Lawrence City Commission at its meeting Oct. 8, 2019, regarding the group's request to make Lawrence a sanctuary city.

At a study session, the Lawrence City Commission discussed potential policies regarding how Lawrence police handle requests from Immigration and Customs Enforcement and how police and other city staff otherwise interact with undocumented immigrants. Though the city has some practices in place, all four commissioners present said they wanted to further discuss written policies to ensure immigrants feel safe in Lawrence.

Mayor Lisa Larsen previously requested the study session so that commissioners could discuss creating a written policy and hear a proposal for a set of sanctuary city policies from a local group known as the Sanctuary Alliance.

The Sanctuary Alliance is proposing that the city create policies that restrict the Lawrence Police Department from cooperating with ICE in noncriminal circumstances and help ensure immigrants are not discriminated against. Specifically, the alliance calls for a policy that prohibits local funds, personnel or facilities from being used for civil immigration enforcement, according to a proposal submitted to the city. That includes not complying with ICE requests to detain immigrants unless they come with a judicial warrant and not providing a person’s immigration status to the federal crime database where permissible by law. The Sanctuary Alliance’s full proposal is available on the city’s website.

“We would like to see policy that has legal bearing and that is transparent to the community,” said Mariel Ferreiro, a Sanctuary Alliance organizer, at the commission’s study session.

Vice Mayor Jennifer Ananda, who previously practiced immigration law, said that regardless of whether the city chooses to use the term “sanctuary,” having written policies regarding interactions with undocumented immigrants was vital.

“That is really staying true to the integrity of wanting to provide a safe community, an equitable community for everyone,” Ananda said. She said the city already followed many of the Sanctuary Alliance’s proposed policies, but that it was important to codify them to ensure they remained in place.

Prior to the commission’s discussion, Police Chief Gregory Burns Jr. told the commission immigration enforcement was not a local matter and that under current practice, the department did not check or report people’s immigration status to federal immigration agencies, with exceptions made for some felony investigations. Burns, who began his position as chief in Oct. 2017, said when he took his position with the city, he made it clear to the department that as law enforcement, officers can only serve warrants signed by judges and not immigration detainers, which are signed by ICE officers. However, he said detainer matters were generally handled through the Douglas County Jail, which does not fall under the authority of the police department.

Burns said the police department was already working on an administrative policy regarding its interactions with ICE, and that the commission could provide input on that policy. Commissioners agreed that they would like to review the policy once its drafted.

The White House previously has indicated a desire to withhold federal funds from cities that have declared sanctuary status. There have been multiple court cases regarding the issue, but Assistant City Attorney Maria Garcia told the commission that rulings had gone both ways, so case law was in flux and was not swaying one way or the other. Garcia also said that there had been no cases in Kansas and that there was no state law prohibiting sanctuary cities.

Dozens of people attended the meeting and about 15 people spoke in favor of the policies during public comment. No one spoke against the policies. Several people told personal stories about deportation and how it had affected them and their families.

After hearing from city staff and the Sanctuary Alliance, Larsen said the commission had the information it needed to move forward with developing a policy or ordinance.

“We do need to get something written down that provides the protection within the law as well as provides limitations on what we are wiling to do as a community,” Larsen said. “What sort of line are we going to draw for our community?”

The City Commission will further discuss potential policies at a future meeting. City Manager Craig Owens said the city would need at least 30 days to fully research policy options, and that choices would be brought back to the City Commission as soon as possible.