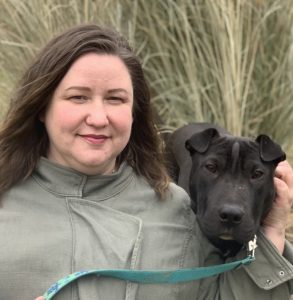 Shannon Wells, the new executive director of the Lawrence Humane Society, is pictured with her rescue dog Finn.

The Lawrence Humane Society’s new executive director did not expect to have a career working with animals, but a little injured dog changed that.

Shannon Wells said the seed for her career was planted in 2011 when she found a miniature pinscher running down the street with two broken legs. It was the first dog Wells had rescued, and would not be the last.

“It really became my passion, much to my surprise, of being able to help people and pets at the same time,” Wells said.

Wells thereafter began working more with animals. She became a certified professional dog trainer and an advocate for broad-based dangerous dog laws, rather than proposals targeting certain dog breeds. It was during those advocacy efforts that she was encouraged to join the staff of a new animal shelter in Kansas City, the KC Pet Project.

“For a while, I didn’t really think that it was a career path, but it just sort of kept being present,” Wells said. “And my passion on the side grew as I started researching, and spending time investing in my own pet, and then branching out to the legislative issues.”

Wells would ultimately go on to have a leadership role at the KC Pet Project, serve as a speaker for the Humane Society of the United States, and, earlier this year, earn her master’s degree in veterinary forensic medicine from the University of Florida.

Wells was appointed executive director of the Lawrence Humane Society following a nationwide search conducted by the shelter’s board of directors throughout 2019, according to a news release from the shelter. In the release, Board Chair John Olsen expressed confidence in Wells’ ability to lead the shelter.

“Shannon has worked tirelessly on behalf of animals, pets, and pet owners in the Kansas City community,” Olsen said in the release. “She will be an outstanding leader for our dedicated team at the (Lawrence Humane Society).”

Wells was an original staff member of the KC Pet Project, which was founded in 2012, according to the news release. The release states that as director of operations for the project, Wells oversaw a staff of 100 people.

Wells also founded the project’s canine parvovirus treatment program, for which she won the Petco Foundation’s Unsung Hero Award in 2018. Parvovirus is common in unvaccinated puppies and causes vomiting and diarrhea. If left untreated, it’s usually fatal. Wells said because the disease is highly contagious, a lot of shelters choose not to treat dogs that fall ill with the virus.

By the time the Petco Foundation honored Wells for her work, the parvovirus ward had saved more than 500 puppies, according to the KC Pet Project’s website.

The project also led her to her current rescue dog, a shar-pei mix named Finn. She treated him when he was critically ill as a puppy, and decided to adopt him once he recovered.

The release states that Wells will oversee shelter operations, accounting and finance, marketing and public relations and 35 staff members. When asked what attracted her to the position, Wells said she felt Lawrence was a livable city and that the shelter was in a good position to take a leadership role in the industry.

“I just really am excited by the place that the shelter is at right now, in terms of what they are poised to do,” Wells said. “So I see them having this incredible staff, this beautiful new building and the support of a very generous community. And for me, I think this is a really good place to do some next-level type of stuff in the industry.”

Wells said once she gets to know shelter staff and programs better, she has two efforts she’d like to focus on. She said she’d like to expand playgroups, foster programs and other initiatives that keep animals physically and emotionally healthy while the shelter tries to find them homes. She’d also like to strengthen pet behavioral training and other resources that help people deal with common problems of pet ownership and ultimately keep their pets.

Wells will replace Interim Executive Director Kirk Putman, who will join the humane society’s board, according to the release. Putman served in an interim capacity following the resignation of former Lawrence Humane Society director Kate Meghji in December 2018. Wells will move to Lawrence from Kansas City in the near future and will begin her position Jan. 2.