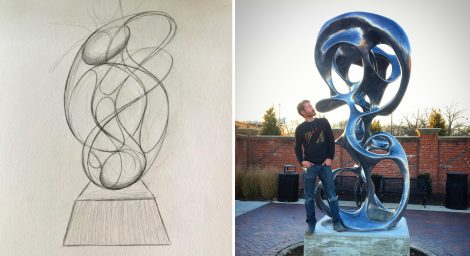 After a competitive process, artists have been selected to create some of the city’s highest-dollar public artwork in recent years.

The City of Lawrence has budgeted about $450,000, as part of its Percent for Art program, for three art installations at the newly renovated building that houses Fire Station No. 1 and the Senior Resource Center; the new police headquarters in northwestern Lawrence; and the new transit center on Bob Billings Parkway. Artists have been selected for the first two projects, and the selection process for the transit center is forthcoming.

The city has a long-standing resolution, enacted in 1986, that allows it to set aside up to 2% of a building project’s budget for public art, and the City Commission elected to allocate the funds as part of recent budgets.

The art installation for the $5.7 million renovation of the fire station building, 746 Kentucky St., is furthest along, with designs for a sculpture taking shape. The Lawrence Cultural Arts Commission recently provided feedback to the artist on preliminary sketches of a sculpture that will be installed on the building’s lawn. Following a regional request for qualifications that yielded 13 applicants, a panel ultimately selected Ottawa sculptor Jacob Burmood.

Creative Resources Director Porter Arneill said Burmood would create an abstract sculpture in cold cast aluminum approximately 8 to 10 feet tall and 3 feet wide. Arneill said the sculpture would be similar to some of Burmood’s other work, which includes an 11-foot abstract aluminum sculpture outside of Arrowhead Stadium in Kansas City, Mo.

“Along those lines of a large abstract sculptural form,” Arneill said. “And in this case, he’s always been very interested in the unique relationship between the fire station and the Senior Resource Center and wants to somehow include, abstractly, that relationship.”

Burmood presented concept sketches to the LCAC at its meeting earlier this month, and Arneill said the commission members favored a concept that had two elliptical shapes to represent the dual function of the building.

An eight-person panel that included an arts commission member, a local architect, representatives from the fire and medical department, the Senior Resource Center and the nearby Lawrence Public Library selected Burmood. Lawrence residents will likely be familiar with Burmood’s work, as it has appeared three times in the annual Outdoor Downtown Sculpture Exhibition. Most recently, Burmood had two pieces in the 2017 exhibit, a draped fabric sculpture titled “Billow” and a winding aluminum sculpture titled “Depth of Form.”

The $19.5 million police headquarters project will receive the largest amount of funding for its art installation, as the amount allocated is based on the overall budget of the project. The city has allocated $340,000 for public art to be incorporated with the project, which will include an adjoining city park. The headquarters is currently being constructed on 29 acres of undeveloped land owned by the city near Sixth Street and Wakarusa Drive.

Because of the large budget for the art project, the city conducted a national request for qualifications. The request for qualifications stated that the city sought a professional artist or artistic team to develop innovative artwork and that the city encouraged artwork that was “an integrated aspect of park amenities.” The city received 39 artist applications for the project and an eight-person panel made up of artists, designers and police, municipal services and parks and recreation officials reviewed those submissions.

The panel selected Tucson, Ariz.-based artist Joe O’Connell, of Creative Machines. Arneill said there was not yet a specific proposal or timeline for the project but that O’Connell has expressed interest in engaging the community in the project’s development.

O’Connell’s project will be located in the currently undeveloped parkland next to the police headquarters. Arneill said it was uncommon to have an artist working in such an open space, as public art is usually located near or within a building and requires the artist to work within certain confines. He said the park created an opportunity for a unique public art installation and that O’Connell was a good pick in that regard.

“He’s really doing a variety of things; some are kinetic artworks, some are more static with formal sculptural elements, and some are actually architectural,” Arneill said. “So he’s really wide-ranging with a lot of experience. And I think that was part of the appeal.”

In 1995, O’Connell founded the design and fabrication firm Creative Machines, which creates interactive exhibits, ball machines and large-scale artwork, according to the Creative Machines website. It has created works for museums, science centers, libraries, hospitals, university campuses and other public spaces.

One of his recent government-commissioned works is “Body Politic,” a $180,000 project that was installed on the Lenexa civic campus. The work comprises stainless-steel orbs with more than 200 cutout silhouettes backlit with colorful lights, according to the City of Lenexa website.

A project with a similar budget to Lawrence’s is the “Growing Home” sculpture that Creative Machines made in San Diego. The $350,000 project includes a turret shell sculpture surrounded by enlarged beach pebbles, according to the project website. The shell is lit from within and perforated with text that tells the history of San Diego.

Arneill previously told the Journal-World that the art budget for the police headquarters may be the largest since the Percent for Art program’s inception. The most recent public art piece funded by the program was the cut-glass sculpture “A Ribbon of Light” by Dierk Van Keppel, which hangs in the middle of the Lawrence Public Library, 707 Vermont St.

Arneill said that as the concepts progress for the two ongoing projects, the arts commission will work with the artists to provide feedback. As for the third project in the Percent for Art program, the $4.5 million transit center and its public art are included in the city’s 2020 budget, and the artist selection process has not yet begun.