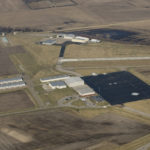 This file photo from March 2009 shows the Lawrence Municipal Airport from the southeast looking northwest.

A judge has denied a request by the City of Lawrence to dismiss a lawsuit filed by a longtime pilot claiming the city hasn’t properly kept up some airport infrastructure.

Great Planes Inc., which operates an airplane hangar and offices at the airport on space leased from the city, filed the lawsuit last spring in Douglas County District Court. The lawsuit alleges that disrepair of the runway damaged one of the company’s airplanes in 2014. Great Planes claims the city breached its contract with the company, and it is seeking damages of about $19,000, plus interest and legal fees.

A judge recently issued a response to the city’s motion, denying the city’s request to dismiss the lawsuit. In his response, filed Nov. 13, Judge Mark Simpson states that when considered in the light most favorable to the plaintiff, as required by case law, the allegations in the lawsuit meet the minimum requirements for a valid breach of contract claim and that it doesn’t matter that they might also qualify as negligence claims. In further support of its denial of the request, the response states that the arguments the city raised in its motion to dismiss require the court to make factual determinations beyond the facts alleged in the lawsuit.

Great Planes executed a 35-year land lease with the city in 1989, according to documents that Great Planes and the city provided to the court. The Kansas secretary of state’s office lists Lawrence resident and longtime pilot Stephen Craig as the authorized officer for Great Planes Inc.

Craig said he was pleased to see that Simpson denied the city’s motion. He said that while he’s had a good relationship with the city in the past, the city did not respond to his maintenance complaints, and he’s concerned about the safety of people who use the airport.

“I have a dispute with the city over its continued failure to properly maintain the Lawrence Municipal Airport, and the city after years of ignoring my complaints left me with no choice but to file this litigation,” Craig said.

The attorneys representing the city in the case, Sean Sturdivan and Tyler Waugh, did not immediately respond to an email from the Journal-World requesting comment.

The lawsuit argues that because of disrepair of the runway and “extended” construction projects that cut off Great Planes’ access to the runway, the city breached its contract in two ways: quiet enjoyment and good faith and fair dealing. The city argues against the two alleged contract breaches, saying that the lease agreement reserved with the city the right to develop, improve or maintain the runway and other public airport facilities “as it sees fit, regardless of the desires or view of the Lessee.”

The city-operated airport is just outside Lawrence on U.S. Highway 24 and covers nearly 500 acres, according to the city’s website. The airport has a 5,700-foot runway and averages more than 100 daily flights. Aircraft that use the airport include single- and twin-engine planes as well as business jets. The city has owned and operated the airport since 1929.

The lawsuit is pending and a hearing in the case has not been scheduled.