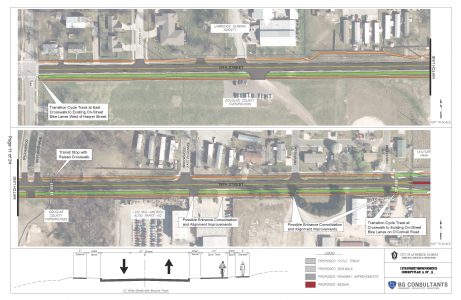 One of the proposed designs for a reconstruction of East 19th Street is shown in this diagram. The Lawrence City Commission has requested that staff bring back a design with a narrower roadway, as well.

City leaders have deferred their decision on the design of the easternmost section of 19th Street, asking staff to bring back an option with a narrower roadway.

As part of its meeting Tuesday, the Lawrence City Commission voted unanimously to defer its choice of a concept design for the project to extend the roadway and reconstruct a segment of it. The city has budgeted approximately $3.3 million to rebuild a half-mile segment of 19th Street beginning at Harper Street and connect it to O’Connell Road, which leads into VenturePark and East Hills Business Park.

The street goes through five neighborhoods, and a coalition of neighbors has opposed the city’s plan to widen the street as part of the project. Mayor Lisa Larsen said staffers had told her that they would bring back multiple design concepts, including one that maintained the street’s current width of 22 feet, and she was concerned that the narrower option had not been included.

Larsen said she recalled that the commission had asked to see a narrower option for consideration. She said she’d also attended several neighborhood meetings regarding the project in the past couple of years and had heard staff indicate that the narrower option would at least be on the table.

“So I heard this promise over and over again, also, that staff would provide at least a concept design of that option that the neighborhood was asking for,” Larsen said. “And so it does concern me that those promises were made and yet we’re not seeing any of that here.”

Larsen then asked that the commission defer the selection of a design for the project until a plan with a narrower street was also provided. City staff told the commission that the narrower concept does not meet city width standards for collector streets and could make it difficult for multiple fire trucks to navigate the street, but Larsen said neighborhoods are unique and one size does not fit all.

Though the other commissioners agreed with Larsen that the narrower option should be on the table, Commissioner Matthew Herbert said he thinks the commission needs to consider the impact that a narrower street would have on the fire and medical department.

The majority of the eastern portion of 19th Street is currently 31 feet wide, but the easternmost portion is only 22 feet wide and has open ditches for drainage. In May 2018, the city proposed design concepts that would widen the street to 47 feet, which the neighborhood coalition opposed. In addition to concerns about the business park connection increasing traffic, some neighbors said they thought widening the street was out of line with the surrounding residential area and would lead to more traffic. Several neighbors reiterated those concerns to the commission Tuesday, emphasizing that there are houses that sit directly along 19th Street.

The city contracted with BG Consultants for the project’s design, and on Tuesday BG presented five concept designs to the commission. City staff is recommending design concept No. 4, which calls for a 31-foot-wide street with a separated cycle track for bicycles and sidewalks on both sides of the street. Staff also recommends maintaining the all-way stop at the intersection of 19th and Harper, constructing speed cushions on 19th Street between Haskell and O’Connell and completing the sidewalk gap between Haskell and Harper. The city’s transportation commission recommends a design with a separated cycle track, but with a street width of only 27 feet.

Once the narrower design concept is developed, the transportation commission and the City Commission will reconsider it along with the existing designs.

In other business, the commission unanimously approved several items related to a contract for the city’s new advanced water metering system. Specifically, the commission approved authorizing an $8.5 million master project agreement with Core & Main LP for the purchase and installation of the new system and related services.