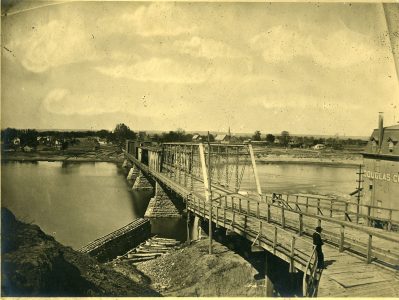 photo by: Watkins Museum of History

The old bridge across the Kansas River near downtown Lawrence is pictured in 1866. The bridge was used to lynch three black men in 1882.

The City of Lawrence has joined a community coalition led by the NAACP to memorialize the lynching of three black men near downtown in 1882.

The Lawrence chapter of the NAACP is working with the Equal Justice Initiative, which created a national lynching memorial in Montgomery, Ala., to erect a historical marker with information about the lynching. In response to a request from the NAACP, the Lawrence City Commission recently voted unanimously to designate the City of Lawrence as a member of the Community Remembrance Project Coalition.

Mayor Lisa Larsen said she thinks joining the coalition signifies that the city supports the NAACP’s efforts and the need to recognize the lynching as part of the city’s history.

“It’s really important for us as a community to keep in mind and remember our entire history, not just the good parts of our history,” Larsen said. “And that we recognize that although we are a community that we believe is forward thinking, at the same time we’ve got a history that we need to reckon with and that we cannot forget.”

A letter to Larsen from Ursula Minor, president of the local NAACP chapter, states that the purpose of the coalition is to build local awareness and enable truthful conversations about the legacy of racial terrorism and injustice through the Equal Justice Initiative’s historical marker project. In addition to coordinating the design and placement of the marker, the coalition will work to connect the project to broader community concerns, plan a dedication and unveiling ceremony, and promote a high school essay scholarship competition, among other efforts.

The Lawrence NAACP History Committee has been working formally on the historical marker project for the past several months, as the Journal-World previously reported. The goal is to erect a marker that will provide information about the victims and the lynching on the bank of the Kansas River where the event occurred.

In the summer of 1882, the body of David Bausman, who was white, was pulled from the Kansas River, according to newspaper and other local archives reviewed by the Journal-World. Pete Vinegar, Isaac King and George Robertson, all of whom were black, were arrested in connection with the murder, as was Vinegar’s teenage daughter Margaret “Sis” Vinegar. Pete Vinegar was never charged with a crime. Before a trial could be held, Vinegar, King and Robertson were lynched by a mob of men who broke into the jail in the middle of the night.

Accounts of Bausman’s murder in historical documents are varied, but they seem to agree that Bausman, who was in his mid-40s, had been having sex with Margaret, who was only about 14, when King and Robertson came upon the scene and allegedly killed him. Though Margaret was not hanged, she was convicted of murder and later died in prison. She was accused of conspiring with the other two men to rob Bausman, though her attorney argued there was no evidence for that accusation.

Minor previously told the Journal-World that the first choice for the marker’s location is near the riverbank in an area on the west side of City Hall, where the marker would be within sight of a stone pillar, still standing today, that was once part of the bridge used to hang the three men. The hope is to have the marker installed in June 2020.

Larsen said there will be a separate process for the placement of the marker, and that the City Commission would still need to approve the location as part of a future meeting.

• Sept. 29 — Lawrence NAACP pushes for memorial at site where three black men were lynched in 1882