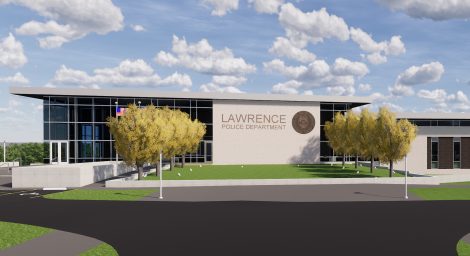 City leaders will soon decide whether to spend another $1 million on the police department’s new headquarters in west Lawrence.

As part of its meeting Tuesday, the Lawrence City Commission will consider spending an additional $1 million to add three more police functions at the headquarters, bringing the total project budget to $19.5 million. As is, the first phase of the project includes a significant amount of “shelled” or unfinished space, and the department would continue to house those functions in another building.

Municipal Services & Operations Assistant Director Melinda Harger said it would be cheaper to finish those shelled spaces now rather than later. Harger said the three additional functions were not included in original plans for the first phase, but that doing them now would save the city money because construction crews were already in place and would not have to install temporary adjustments.

“There is tremendous savings in doing it now with this contractor versus coming back even a year later in 2021 and doing it,” Harger said. “We looked at what it would cost: the remobilization, the escalation costs and we’re getting the savings of not having to put in temporary walls, temporary adjustments to the HVAC.”

City staff is recommending that the commission authorize the city to finish the spaces for investigations, administration and the crime lab, which would allow those divisions to move their operations into the new headquarters building, according to a city staff memo to the commission. The city estimates that finishing those spaces now would save the city at least $300,000 in future construction costs.

To cover the cost of adding those three functions now, city staff is recommending the city use money that was budgeted for police department salaries but wasn’t spent because of vacancies. The memo states that despite the department’s best efforts to fill all vacancies, the department still has 13 open positions. Another new officer training academy will be held in January, but at the current pace the department will be at least $1.7 million under budget for salary and benefits for 2019. Alternatively, staff said the commission could free up $1 million by making revisions to the 2020 capital improvement plan.

Harger said that if the commission decides not to use the approximately $1.7 million of unused salary funding to expand phase one of the police headquarters project, the money would be held in the city’s general fund balance and would be available for other expenses.

The original plan calls for the headquarters to be finished by November 2020. The change order indicates that finishing the shell spaces would add about a month to that timeline.

If the shell spaces aren’t finished, the police department could still move all of its services — including its patrol, evidence and records divisions — out of the downtown building it currently shares with Douglas County. Several police operations, however, would remain at the department’s Investigations and Training Center in west Lawrence. In total, 66% of the department’s staff could be housed at the headquarters under the $18.5 million plan, according to the memo.

But if the commission approves the expansion of the project, the memo says, 83% to 91% of police force staff could be housed at the headquarters, depending on whether new police training was in progress. It would also raise the possibility of finally having all police department staff under one roof.

If the expansion is approved, Harger said the city could consider making temporary adjustments at the headquarters — which is designed to handle future growth and therefore has more space than currently needed — so the department could relocate training and other remaining functions to the headquarters and vacate the Investigations and Training Center.

Construction of the headquarters began in August. The headquarters will be located on undeveloped land owned by the city at 5100 Overland Drive, which is behind the Walmart near Sixth Street and Wakarusa Drive.