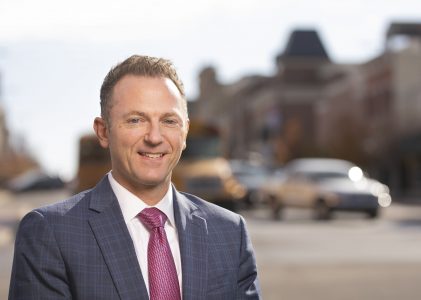 In his first 100 days in office, one of the things City Manager Craig Owens noticed firsthand — while driving the city’s streets, observing the alleyway behind his house or pushing his son’s stroller over the sidewalks — was that the infrastructure was in bad shape.

Owens said the story is the same underground, where city water and sewer mains are in need of maintenance. He said that as the city worked out its 2020 budget this summer, there were a lot of unmet needs. But he said what didn’t seem to get its due attention was infrastructure.

“There were a lot of passionate remarks from the public and from stakeholders in the community without a loud voice really addressing the infrastructure issues that I think are so fundamental, and clearly the city’s most basic responsibility,” Owens said. “So these are going to be meaty community conversations over the next several years.”

The condition of the city’s infrastructure was one of Owens’ key observations in his 100-day report, which he recently presented to the Lawrence City Commission. Owens, who came to Lawrence from Clayton, Mo., began his tenure as the city’s top administrator in July. Other issues noted by Owens in his report include the shortage of high-paying jobs and how the commission interacts with the public.

Owens said he suspects the cost of the city’s needed infrastructure maintenance will actually be many times more than current estimates. The city’s five-year Capital Improvement Plan has more than $92 million of unfunded capital projects, and Owens said he thinks an ongoing engineering review will determine that number is very conservative.

“Our engineers are in a two-year process of evaluating all of these needs, so we know how big this number really is,” Owens said. “And more specifically, where it is and where we would get our best bang for the buck in making investments to climb back out of this hole.”

He said the city needs to strive for the lowest cost of ownership by maintaining infrastructure on a regular, incremental schedule, which he said preserves the infrastructure longer and costs the city and its taxpayers less over time. However, he said before the city can follow that model, it first need to address “decades of disinvestment.”

In addition, Owens said the city will need to assess its stormwater capacity, as stormwater levels hit a new peak this summer, as well as the costs related to the contamination remediation at the former Farmland fertilizer plant. Owens said like many communities, Lawrence is going to have to reconcile a lot of needs and limited resources.

“We need to be very smart about how we apply any new dollars to trying to address this, so that we get the best value and make the most progress to get toward this future where we are in much better shape,” Owens said. “But it’s going to be a long journey.”

He said determining the current condition of infrastructure and coming up with a maintenance plan should be the new commission’s first priorities, and that they should also factor into the update of the commission’s strategic plan. When it comes to making decisions, he said he believes in using data and evaluating how Lawrence’s services compare to those of its peers.

Owens said he also observed a shortage of high-paying jobs, which he characterized as a missing piece for a growing city the size of Lawrence.

“I do hear from all parts of the community that primary job growth is really, really needed here,” Owens said. “And with our large population expansion over the last couple decades, we are just not matching up the job creation with the population growth. That balance could be tilted back the other way a little better.”

The Journal-World recently reported that for the first time, federal and state data show that more than half of all Lawrence residents who have a job, or 53%, commute outside the city. Lawrence has also been struggling with an affordable housing shortage, and some city leaders have said increasing local incomes is a key part of addressing the problem.

Owens said growing local businesses, supporting entrepreneurism and attracting regional businesses to expand in Lawrence are important sources of job growth and creation. He said nothing he’s observed so far indicates the city needs to change its approach to economic development, but that the push needs to be consistent.

“It feels like the right attitudes exist and there is a lot of good work in trying to prepare for it,” Owens said. “We just need to be consistent, continue to work to deliver results, and eventually find the right matches with industry to get here.”

City Commission and the public

During his first 100 days in office, Owens also had a lot of conversations. He met with more than 65 community leaders and with 850 city employees, both individually and in groups.

Even though Owens said residents relayed a desire to take care of one another and work together, he also heard that City Hall and city meetings can be frustrating. He said when he told people he was the new city manager, some told him they wouldn’t want his job or simply told him good luck.

Another testament to the environment at City Hall that Owens noted is that the average commissioner tenure over the past 22 years is 4.8 years, and only four years if longtime commissioner Mike Amyx is factored out. Owens said to have commissioners with such short tenures was unusual and has an undeniable impact given the complexity of city operations and the learning curve for commissioners.

Regarding City Commission meetings, Owens noted the same model has been in place a long time but isn’t necessarily the best model.

The city sometimes holds meetings to gather public input on certain topics or posts online surveys, but largely relies on public comment or submitted correspondence during City Commission meetings. Residents can address the commission for a maximum of three minutes and must wait until the particular agenda item they wish to comment on is in front of the commission, which on occasion can take hours.

Owens said he thinks there is an opportunity for the city to find a new, more effective method of engaging all of its residents.

“It probably looks like us going to where people are, more than us expecting that everybody is going to gather at 9:30 on a Tuesday night and cram into the room and wait for their three minutes at the very end of a decision-making process,” Owens said. “That probably doesn’t describe the ideal circumstance.”

He said he’d like the public and the commission to give the city the latitude to try new approaches to directly engage with residents, even if some end up failing. He said that could mean listening posts and conversations where people are already gathering, like barbershops, schools, book clubs or dinners.

“I’d like for us to try, because I don’t think anybody right now would describe the way we do engagement and decision making as a community as great or wonderful or satisfying,” Owens said.

Owens described the people he’s met in Lawrence as smart, caring and passionate. He said people have a good sense of the city’s history, and that Lawrence’s history also seems to inform the city’s values.

“When I asked about priorities or what are the best things about Lawrence, there was a version of the phrase ‘we take care of each other’ in a lot of the conversations,” Owens said. “And that was one of those really great surprises in this process and something that’s important for me to always keep in mind.”

Former City Manager Tom Markus proposed his recommended budget for 2020, but Owens was in the city manager role as the commission worked to revise and finalize the budget. Owens said he found the competition for social service funding to be a dramatic part of the budget process. He said the city does more for social services than he’s been accustomed to in other places, and he thinks there could be better coordination.

Though Owens most recently came from the more affluent community of Clayton, he was involved in St. Louis social service organizations and has worked in other cities in the past. Owens said in his volunteer work, collective impact was a key consideration. He said that the city has 650 not-for-profit organizations, and he thinks considering how to work more collectively could really help the city focus and get better results.

“With 650 not-for-profits in this community, somebody should be helping us to collectively understand what we are trying to achieve and all row together,” Owens said.