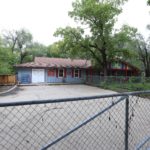 Penn House, 1035 Pennsylvania St., is now empty with the relocation of the nonprofit's staff and services to the Ballard Center in North Lawrence.

Plans to build eight affordable housing units on the site of the former Penn House building in East Lawrence have been withdrawn after concerns from neighbors, and the property owner now plans to build single-family homes.

Earlier this fall, Lawrence residents Mike and Tami Nevels filed plans to demolish the existing structure and construct two four-plex buildings, each containing four one-bedroom apartments. The Nevels planned to partner with the Lawrence-Douglas County Housing Authority to provide the housing for its Hope Permanent Supportive Housing Program, which provides housing for chronically homeless people with disabilities, which include mental illness or substance use disorders, according to the LDCHA website.

The Nevels, who live in the neighborhood, had been working with the East Lawrence Neighborhood Association as they planned the project, but Tami Nevels said she decided to withdraw the plans after talking with a group of neighbors who lived near the property.

“We sat down for a couple hours and just talked about the program and the project and what they envisioned for the neighborhood and what that particular project meant for the neighborhood,” Nevels said. “And after talking with them, I realized that it wasn’t the right place for it. And I understood their concerns.”

The site consists of two lots near the corner of 11th and Pennsylvania streets and is currently zoned for single-family residential uses. The project would have required a zoning change to multidwelling residential in order to move forward as planned.

photo by: Rendering by Sabatini Architects

After the original plans were filed, homeowners in the 1000 block of Pennsylvania Street sent a letter to ELNA outlining their position. The letter stated that the residents were opposed to changing the zoning of the two lots, and that they felt strongly that the added population density would have negative consequences for residents. The residents added that they would oppose density increases regardless of what kind of development wanted to locate at the site.

Nevels said they no longer plan to increase the density of the lots. She said they now plan to build single-family homes on each of the two lots and will look for a more appropriate location for the affordable housing project. She said David Clemente will be the builder for the houses, which will be sold at market rate. She said construction on the first home would begin as soon as the building permit is approved, hopefully within the next 30 days.

Regarding the new housing for the Hope program, Nevels said they still want to pursue those plans, but in a place where the project would be more welcome. Nevels said costs for that project keep creeping up, so they are hoping to find someone who wants to donate the type of lots they are looking for. She said they need a location that is close to a bus line, as well as social and other support services.

“We can’t plop it out in the country,” Nevels said. “It needs to be within walking distance to some of the services that they need.”

Penn House was formerly operated by the Ballard Center and provided a clothes closet, community food pantry and household goods store. The Ballard Center relocated those services to its building in North Lawrence last year in order to operate more efficiently, the Journal-World previously reported. The Ballard Center then sold the property at 1035 Pennsylvania St.