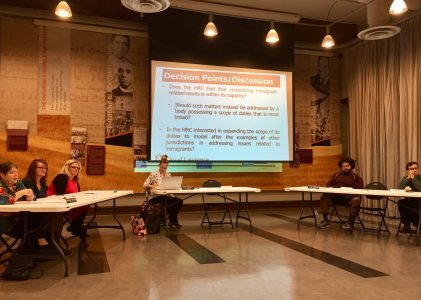 The city's Human Relations Commission discusses whether considering immigrant related issues is within its capacity at its meeting Nov. 4, 2019.

The city’s Human Relations Commission would like to more deliberately address discrimination related to immigration status as part of its duties.

At a special meeting Monday, the HRC voted unanimously to adopt immigration status as part of the scope of its dealings in the future. HRC Chair Katie Barnett said she thought addressing such discrimination was within the board’s duties, which include eliminating prejudice against racial, ethnic and other groups and furthering goodwill among the community.

“I do agree that is a broad and lofty goal, but one we are ready to tackle,” Barnett said. She noted that the HRC had previously hosted an event about immigration law to help inform residents of their rights.

The HRC consists of nine volunteer members from diverse backgrounds who work to eliminate discrimination in employment, public accommodations and housing by accepting, investigating, ruling upon and resolving complaints, according to the HRC website. The HRC also studies the problem of discrimination and any other matter that may have an adverse impact on community relations.

Board member Sarah Bloxsom agreed. Bloxsom said community members had brought the issue to the HRC and she felt it was what the board members had been recruited to do.

“We serve under the scope of, if we see something boiling, we are going to be as a body holding public meetings, creating councils to see to this issue so that all voices can be heard,” said Bloxsom, noting it was also the board’s duty to educate the community about discrimination and all its forms.

Board member Caleb Stephens said it was important to remember that the identities of the people that the board aims to protect often overlap and are interrelated. Stephens asked city staff if the board should discuss whether immigration status should be added as one of the protected classes in city code.

City Attorney Toni Wheeler responded that was not part of the board’s current discussion. Wheeler said that the consensus from the City Commission was that that question needed to be studied thoroughly, and that her office will be studying all the consequences of adding immigration status as a protected class and taking that information back to the City Commission for discussion.

The special meeting was called to discuss issues related to a proposal from a local group, the Sanctuary Alliance, to make Lawrence a sanctuary city, which involves how police handle requests from federal immigration agents as well as preventing immigrants from being discriminated against. At the direction of city attorneys, the HRC did not discuss the broader request to make Lawrence a sanctuary city, but focused instead on whether the HRC felt that considering issues related to immigration status was within its capacity and whether the board should expand its duties to further address such issues. The HRC indicated that more specific actions for how it will address immigration status could be included in future discussions.

The Lawrence City Commission will discuss the HRC’s recommendation regarding immigration status and the broader topic of sanctuary policies at its meeting Nov. 12. The Sanctuary Alliance is proposing that the city create policies that restrict the Lawrence Police Department from cooperating with Immigration and Customs Enforcement in noncriminal circumstances. The alliance also proposes policies related to nondiscrimination and support services, including not collecting immigration-related information in the provision of city services unless required by law and not allowing ICE or Department of Homeland Security agents into local buildings such as City Hall, the municipal court and recreation centers. The Sanctuary Alliance’s full proposal is available on the city’s website.