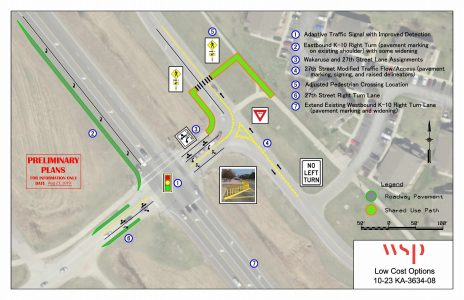 City leaders will soon review changes meant to improve safety at a troublesome intersection on the South Lawrence Trafficway.

As part of its meeting Tuesday, the Lawrence City Commission will receive updates from the Kansas Department of Transportation on the upcoming project to expand the SLT and interim safety improvements to the trafficway’s intersection with 27th Street/Wakarusa Drive. The intersection regularly bottlenecks traffic and continues to be a common site for accidents.

The Journal-World reported in December of last year that 20 accidents had occurred at the intersection in as many months. KDOT wasn’t able to immediately provide an update on those numbers Friday afternoon.

KDOT began a three-year environmental impact study on a lane expansion project for a portion of the trafficway in September 2018. In the meantime, KDOT hired design consultant WSP USA to study low-cost safety and traffic flow improvements at the intersection, and city and Douglas County staff provided input during the development of the concept plan for those improvements, according to a city staff memo to the commission. 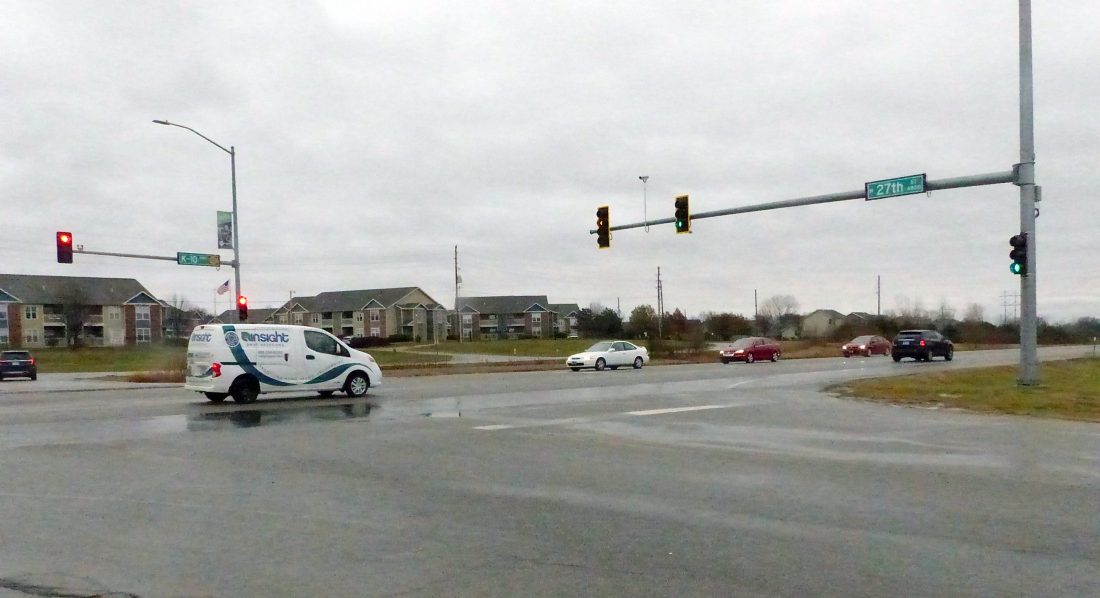 Traffic passes through the Kansas Highway 10 intersection at Wakarusa Drive and 27th Street on Saturday, Dec. 1, 2018.

The plan includes seven changes to the area of the intersection to improve safety. Plans call for an adaptive traffic signal with improved detection; widening and extension of the westbound SLT right turn lane; addition of a 27th Street right turn lane; and new location for the pedestrian crossing on Wakarusa Drive. KDOT spokesperson Jeanny Sharp said the new traffic light will be able to adjust signal timing based on the amount of traffic present at any given time in order to improve traffic flow.

There are several other changes meant to improve traffic flow, including pavement markings, signage, and raised delineators on 27th Street and Wakarusa Drive, according to the plan. KDOT presented the plan to the Transportation Commission at its Sept. 9 meeting. The Transportation Commission expressed concerns about conflicts with right-turning traffic yielding to pedestrians in the crosswalk, according to the memo. To address those concerns, KDOT will install “No Turn on Red” signs for the eastbound and southbound legs of the intersection.

In September, KDOT installed electronic signs ahead of the intersection with 27th Street/Wakarusa Drive warning motorists on the trafficway that they are approaching a stoplight and need to slow down.

As part of the meeting Tuesday, KDOT will also present a list of other safety improvements for the SLT corridor that it wishes to discuss, according to a letter to the city from KDOT engineer Aaron Frits. Those potential changes include lights at the intersection of K-10 and Farmer’s Turnpike/County Road 438; rumble strips at the K-10 and I-70 interchange; as well as warning sign systems. Frits will also provide the commission an update on the current status of the environmental impact study for the lane expansion project.

The portion of the SLT east of Iowa Street was finished in November 2016, completing the final segment of the bypass project. The eastern section is a four-lane divided highway, but the road changes to a traditional two-lane highway west of Iowa Street. The trafficway’s western leg extends from Iowa Street to I-70.