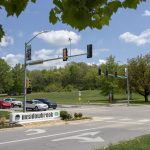 Pictured on May 6, 2019 is the intersection of Bob Billings Parkway and Crestline Drive. The Lawrence City Commission has chosen the southeast corner of the site for the location of the Lawrence Transit Transfer Hub.

City leaders have officially chosen a site on the edge of the University of Kansas’ West Campus for the city’s new bus-transfer hub.

At its meeting Tuesday, the Lawrence City Commission selected a site on Bob Billings Parkway, between Crestline Drive and Iowa Street, for the Lawrence Transit Transfer Hub. The project will serve as a bus-transfer point and will include an indoor station for the city bus service, which is coordinated with the KU bus service.

Along with selecting the site, the commission also directed city staff to work with KU for a site analysis, which should lead to a design proposal. The city will also need to hash out a land use agreement with KU because the university owns the site.

Tuesday’s approval follows years of discussion about where the bus-transfer hub should go, including vocal opposition from neighbors near previously considered sites. The city paid for two consultant-led location studies, the first conducted in 2014 and the second in 2018. Though the Bob Billings site was not the final recommendation in either study, a memo from city staff to the commission notes that the site was considered one of the top seven locations in both studies and that staff believes the location provides an “adequate opportunity” for the hub.

Both studies recommended that the city consider locating the hub near the intersection of 21st and Iowa streets, and in both instances residents from the adjacent Schwegler Neighborhood opposed the project.

Last summer, after receiving the results of the 2018 study and a protest petition from neighbors, Commissioner Stuart Boley and Mayor Lisa Larsen indicated that they would like the city to consider the Bob Billings Parkway site, as it scored well on the consultant’s evaluation and was located away from residential neighborhoods. Consultants originally said that the university was hoping to develop the site as part of a gateway to West Campus, but the commission directed staff to ask KU to reevaluate the site. KU subsequently indicated that it preferred the Bob Billings Parkway site to another possible site on Stewart Avenue.

Money for the bus-transfer hub was allocated as part of the additional sales tax created to operate and expand the city’s bus service, which voters originally approved in 2008. About $5 million has been set aside to build the transfer hub. Lawrence residents voted in 2017 to continue the 0.2 percent sales tax for transit operations for another 10 years.

• Approved a master plan for a park near the city’s new police headquarters project in western Lawrence. The design of the park includes about a dozen features, including a shared-use path, a treehouse, a rope bridge, fitness equipment, playground equipment and a boulder plaza with water spray features. The plan for the park is broken into five phases, the first of which includes the paths, fitness equipment and maintained green space, according to a city staff memo to the commission. Future capital improvement projects related to the park will be submitted for consideration as funding allows.

• Directed city staff to issue a request for proposals for preliminary design services for a field operations and maintenance facility at the city-owned remediation area on the former Farmland Industries site. The new facility would replace maintenance sites used by various departments throughout the city. Staff estimates that design services for the facility would cost about $150,000, according to a city staff memo to the commission.