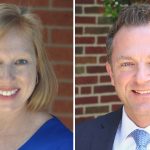 Susan E. Sherman, left, and Craig Owens, right, are the two finalists for the Lawrence city manager opening. Sherman is the assistant city manager for the City of Olathe, and Owens is the city manager of Clayton, Mo.

Both candidates for the position of Lawrence city manager said the city’s sense of community appeals to them and that they intend to improve on it if they’re hired.

Both Sherman and Owens are graduates of the University of Kansas Master of Public Administration program and are International City/County Management Association Credentialed Managers.

Regarding why she is interested in being the city’s top administrator, Sherman, who attended the University of Kansas, told the Journal-World that Lawrence is a unique and special place.

“Beyond even just the college experience, you have great citizen engagement, strong neighborhood presence, vibrant downtown, quality schools,” Sherman said. “And it’s unique to find a community that has pulled all of those elements together and has that kind of a community feel.”

In addition, she said that after about 30 years working for Olathe, she felt like it was time for her to see if there were other opportunities where she could use her skills to make a difference.

“I have a great passion for local government, for city management and for making communities better,” Sherman said.

Sherman, 53, has been Olathe’s assistant city manager since 1994 and worked for the city in various roles since 1989. Over the past few decades, Sherman said she has seen Olathe’s population increase from about 50,000 to 142,000 people. In that time, Sherman said she is most proud of the partnerships that have been built, including those among the school district, businesses and health system, as well as the overall transformation of the city as it grew.

“During my time, we have seen huge, rapid growth of residential and commercial (areas) and jobs in Olathe, and to be a part of that has been something fantastic,” Sherman said. “And I’m really proud of what we’ve built here.”

As part of her current position, Sherman is responsible for the operations of the Olathe police, fire, municipal court, information technology, and parks and recreation departments. Regarding her leadership style, Sherman said she focuses on making sure the whole management team has what it needs to be successful and above all on supporting the commission’s vision for the community.

“I listen more than I talk; I like to convene people to talk about issues and get perspectives,” Sherman said. “But ultimately, the city manager’s job is to make sure that the goals and vision of the commission are the top priority, and that is what we work on.”

Regarding why he wants to be Lawrence city manager, Owens, who said he still has family in Johnson County, said the job presents a rare opportunity both personally and professionally.

“What not everybody understands about city managers, I think, is it’s not just a job,” Owens said. “You’re selecting a place where you think you can make a difference in people’s lives — that’s the community part of it.”

Owens, 49, has been Clayton’s city manager since 2008. Previously, Owens has worked for the cities of Rowlett, Texas; O’Fallon, Ill.; and Hazelwood, Mo. He said some of his experiences in those cities match up well with Lawrence and have prepared him to handle issues such as downtown development, expansion of the South Lawrence Trafficway and affordable housing efforts.

Regarding downtown development, Owen described Clayton as very dense and urban, like a second downtown for nearby St. Louis. He said he was proud of bringing new businesses and expanding existing ones in the downtown, including high-rise buildings, especially in the context of a sensitive urban environment that includes residential areas. He said he thinks he has a good sense of the balance that needs to be struck in Lawrence.

“You have such a wonderful, historic downtown, and you see some areas around it that are also looking at change or development,” Owens said. “How you do that in a sensitive way and making sure that it becomes an asset for the community is something that I have a lot of recent experience in.”

In relation to the South Lawrence Trafficway, Owens said that there were highway expansion or interchange projects in Rowlett, O’Fallon and Hazelwood while he worked in those cities, and that good planning and proper management of the surrounding land were important to those projects. Owens also noted that he served on the board of the St. Louis-area nonprofit Beyond Housing, which deals with affordable housing and other community issues. He said Lawrence’s recently approved sales tax to fund affordable housing efforts caught his attention as an unusual and progressive step, and that he was looking forward to working on an issue he is passionate about.

Regarding his leadership style, Owens said he thinks it’s important to provide results that are measurable, and to do so through a collaborative conversation with elected leaders and all the stakeholders in the community. He said that approach would help the city meet its goals and make adjustments as needed.

Earlier this month, the Lawrence City Commission narrowed down a field of 24 candidates for the city manager position, selecting six people to continue to the interview stage. The commission conducted the first round of in-person interviews Saturday. The finalists will visit Lawrence to meet with members of the community at 1:30 p.m. April 7 at the Carnegie Building, 200 W. Ninth St.

• March 25 — Finalists for Lawrence’s next city manager to be announced this week; community meeting to follow