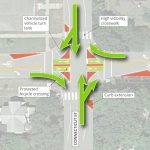 Potential design plans show changes to the intersection of 13th and Connecticut streets as part of the upcoming installation of a bicycle boulevard.

The City of Lawrence will be putting up temporary traffic installations to demonstrate potential designs for the city’s first bike boulevards, which will modify two city streets to make them user-friendly for cyclists and pedestrians.

On Thursday, the city will use materials such as paint, traffic tape and plastic bollards to demonstrate traffic designs at the intersection of 13th and Connecticut streets and on 21st Street east of Naismith Drive, according to a news release from the city. The intersection at 13th and Connecticut streets will be closed from approximately 9 a.m. to 1 p.m. to allow for installation, but 21st Street east of Naismith Drive will remain open to traffic throughout the process.

The temporary installations will allow residents to provide feedback before permanent changes are installed. A survey regarding the design of each bike boulevard will be available on the Lawrence Listens website beginning Thursday and will receive responses until April 5.

The 13th Street bike boulevard will extend about three-quarters of a mile from Massachusetts Street to Haskell Avenue, and the 21st Street bike boulevard will extend about 1.3 miles from Iowa Street to Massachusetts Street. Designs for bike boulevards vary, but they typically use a variety of features — such as speed bumps, restricted entries and curb extensions — to lower the number and speed of cars and to optimize the roadway for bicycle travel.

More information about the bike boulevards and the temporary installation is available on the city’s website, Lawrenceks.org.