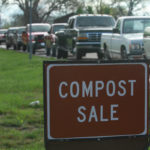 The City of Lawrence’s solid waste division has begun its spring compost and woodchip sale.

The sale is cash only, with compost and woodchips costing $10 per bucket load, equivalent to two cubic yards, according to a city news release.

Small quantities that are self-loaded into small bags, plastic totes and boxes will be free, the city said.

If residents can’t make it to the spring sale, they’ll have the opportunity to purchase and self-load compost and woodchips every Saturday until mid-December from 9 a.m. to 3 p.m. More information about the weekly sales are available at LawrenceRecycles.org.

The city’s compost is created from the weekly curbside collection of residential yard waste, and the woodchips are made from brush and tree debris dropped off from residential and commercial sources, according to the city’s release.